A Toronto Transit Commission parking lot in the north part of the city will be transformed into a mixed-use property with hotel, condominium office, restaurant and retail components over the next few years by The Gupta Group/Easton’s Group. 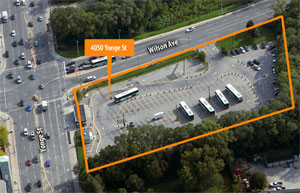 The company purchased a 3.2-acre site at 4050 Yonge St. at the northwest corner of Yonge and York Mills Road for $25 million from Build Toronto, the real estate and development corporation created in May 2010 to generate value from the City of Toronto’s real estate assets. The deal was facilitated by CBRE Limited’s Toronto office.

“These kinds of sites are very hard to come by,” Steve Gupta, chairman and chief executive officer of the family-owned The Gupta Group/Easton’s Group, said of the property in close driving proximity to Highway 401 and the Don Valley Parkway and a 20-minute subway ride south to Union Station.

A 266-spot surface parking lot will be replaced by a $300-million development that includes: a 130,000-square-foot, 10-storey, 200-room, four-star hotel with an upscale rooftop bar/lounge overlooking the Don Valley Golf Course; 330,000 square feet of condominium office space over seven storeys, with units starting at 2,000 square feet; 40,000 square feet dedicated to retail and restaurants on the ground floor; and three levels of underground parking.

The project will be designed by Toronto-based Page + Steele/IBI Group Architects.

The site’s zoning allows for use of the property as “employment land” in the largely residential and affluent Hogg’s Hollow neighbourhood and prevents residential condo development. Gupta would have preferred more than 10 storeys, the maximum allowed in the area by municipal bylaws.

Gupta said the Marriott and Hilton hotel chains, which have hotels built by The Gupta Group/Easton’s Group, will be vying to put their imprint on the hotel. He’ll consider proposals from both of them.

Gupta has spoken with companies interested in the office space, including some that would like to buy entire floors. He’s so impressed with the location he plans to relocate his headquarters from its current location in Gateway Centre at 3100 Steeles Ave. E. in Markham.

“We feel that office condos are much more attractive to people because once you own your place, nobody can kick you out or increase your rent,” Gupta said. “People can buy it and have a sense of pride in ownership and can’t be pushed out of the space at the end of a lease.

“You can control your own heat, hydro and utility bills. All you have to worry about is taxes.”

Gupta believes a number of doctors and health-related services will want to have offices in the building because the property is reasonably close to Sunnybrook, North York General and Humber River hospitals. An onsite pharmacy would therefore also make a lot of sense.

The company is handing over 1.16 acres of its land on the Don River flood plain to local conservation authorities as part of its commitment to the environment and urban sustainability. That work — including rebuilding the riverbank with stones, landscaping and an overall clean-up — will begin this summer.

Gupta would like to have building permits in place to begin construction in the fall, but is certain it will begin no later than March 2016. Completion is scheduled for 2019.

“The city is quite interested to get this going,” said Gupta. “It wants a hotel there because it knows there’s a need.”

The Gupta Group/Easton’s Group has designed, built and managed mixed-use developments across the Greater Toronto Area (GTA) since 1979. Its portfolio includes hotels in the GTA, Montreal, Kingston, Sudbury and Thunder Bay.  TownePlace Suites and Courtyard Marriott both opened in the same Markham building on Jan. 9.

“It’s the first of its kind in Canada and it’s absolutely gorgeous,” Gupta said of the project which converted a tired and older property into two new hotels.

Gupta was a 20-year-old with less than $200 when he arrived in Toronto from India in 1971 and, through hard work and saving his money, was eventually able to start buying, refurbishing and flipping cheap houses. He used those profits to buy a truck stop and service centre 100 kilometres east of Toronto in Port Hope in 1978, and was sufficiently successful to move up to purchasing apartment buildings.

The Gupta Group/Easton’s Group and partners purchased more than 8,000 Toronto rental apartment units from receivers for $270 million in 1986 and 1987, and later sold them at a profit to focus on developing hotels. With that kind of experience, it was an easy decision to enter the downtown Toronto residential condo business in 2012 with King Blue Condominiums at the corner of King Street West and Blue Jays Way.

The Page + Steele/IBI Group Architects-designed project, with 875 units in 44- and 48-storey towers, was in the selling stage when The Gupta Group/Easton’s Group sold it to Shanghai-based Greenland Holding Group Co. for an undisclosed price last September.

“Greenland is a $500-billion company that has taken over full responsibility,” Gupta said of the transaction. “It’s good for the city and good for Canada to have some overseas money come in and develop, and we’re hoping to do some more business with them.”

The Gupta Group/Easton’s Group’s Dundas Square Gardens — a 48-floor, 968-unit condo at 200 Dundas St. E. designed by Page + Steele/IBI Group Architects — is 95-per cent sold. Construction is expected to start in the fall.

Gupta is hoping to get city approval this spring to move forward with The Rosedale On Bloor, a mixed-use condo development at 387-403 Bloor St. E. in Toronto. The company is proposing to build a tower of approximately 50 storeys for residential condos and a 12-floor building that will house either offices or a hotel. Page + Steele/IBI Group Architects will be involved with that project as well.

“We don’t want to go mass production and just make all kinds of money. That’s not our interest. Our interest is to be first-class.”