“This honour from BILD is very humbling to me,” Baldassarra said of the April 25 awards. “I never dreamed that my life would be filled with such accomplishments.” 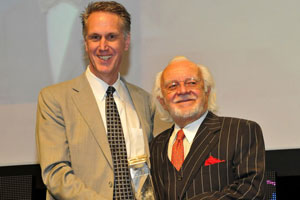 The BILD Awards recognize and celebrate excellence within the building and development industry. Awards were presented in 47 categories, ranging from ad campaigns to design to community building.

Baldassarra received the association’s highest honour for his work in the industry and within the Greater Toronto community.

Less than a decade after arriving in Canada from Italy in 1958, Baldassarra and his partners, Jack Wine and Philip Rechtsman, created Greenpark Homes. The company was to become Canada’s largest home builder; to date Greenpark and its affiliates have built and sold almost 70,000 homes and condominiums, focused in the GTA.

“He is an industry champion”

“It is a privilege to present Carlo with this prestigious award,” said BILD president and CEO Bryan Tuckey. “He is an industry champion who has given so much to our association and to communities throughout the GTA.”

Baldassarra is well-known for his generosity in the community. In 2012, he was inducted into the Italian Walk of Fame. His induction notes his “ongoing support to numerous churches and charities such as Villa Charities and Youth Bocce Canada of which he is a co-founder.

The Baldassarra family and businesses have donated millions of dollars to help support and create new healthcare infrastructure in the GTA, including to the Intensive Care Unit at Toronto General Hospital, $1 million gifted to the Chemotherapy and Blood Transfusion Units at the Princess Margaret Hospital  and donations to The Baldassarra Cardiac Unit at the Toronto General Hospital.”

“Today, I look back on my career and I am so grateful for all the people I have worked with to achieve so many incredible milestones,” Baldassarra said. “I look forward to creating even more opportunities through Greenpark with my sons and my growing family of grandchildren.”

Builder of the Year

Meanwhile, for a record fifth time, Mattamy Homes has been named the BILD Award’s Home Builder of the Year.

Mattamy previously won the award, which recognizes “the builder who sets the standard for the rest of the industry by their leadership in improving the overall image of building and development” in 2001, 2007, 2009 and 2011.

According to a news release, one component of the judging looks at a satisfaction survey of recent home owners. The company’s reported pride in maintaining close contact with homebuyers appears to pay off. The company is said to organize summer barbecues, winter tree lightings and spring flower plantings in its completed neighbourhoods.

“Mattamy continues to set incredibly high standards for itself and the rest of our industry,” Tuckey said. “Winning this award once is a remarkable achievement for a builder.

“But to be named BILD builder of the year for a fifth time is simply extraordinary.”

Mattamy Homes began with the construction of a single home in Burlington in 1978. The company has since constructed more than 60,000 homes in 150 communities throughout the GTA, Ottawa, Calgary, and Edmonton.  It has also constructed homes in Minneapolis, Charlotte, Phoenix, Jacksonville and Orlando in the U.S.

Other award winners include TAS and Empire Communities for Green Builder of the Year. Yonge + Rich by Great Gulf Homes received recognition as best high-rise project and Urban Towns at Bayview by Treasure Hill Homes took the award for low-rise project.