Much has been made of the boom in transit-oriented development in Vancouver, but one of the surest signs of its rise is the fact that three years ago analysts didn’t even cover the phenomenon.

Things changed two years ago when brokers at Jones Lang LaSalle noticed that none of the tenants they were working with in the suburban market would consider developments off-transit.

“They all wanted to be located where their staff could continue with high-rapid transit,” said Scott MacDonald, a broker associate with Jones Lang LaSalle Real Estate Services in Vancouver. “So we decided to quantify it, because no one else did.”

That led to the creation of the Jones Lang LaSalle Rapid Transit Index, which compares office space that lies within 500 metres of a rapid transit station outside of the downtown core to office space outside of that boundary. 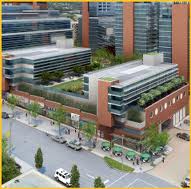 The index regularly analyzes space in five markets: Vancouver, outside of the downtown core, Surrey, Richmond, Westminster and Burnaby. According to MacDonald, 96 per cent of all square footage of office space currently under construction or in proposed or preliminary planning  is within 500 metres of a transit station.

The Jones Lang LaSalle Rapid Transit Index for the third quarter of 2013 shows 28 major developments either underway or in the proposal or planning stages. Eleven of those are in Vancouver, four in Burnaby, three in New Westminster, six in Surrey, and four in Richmond. (Brewery District Building in New Westminister show in image)

Price and ease of transportation is key

Price and ease of transportation is what’s driving the market. MacDonald said it boils down to the cost of space in the downtown core compared to cheaper rent in the suburbs.

But the addition of a transit station means that while some amenities might be lacking, employees can still get to and from work, and transit-oriented development becomes much more appealing than an isolated suburban office park.

HSBC, for example, recently left space in several buildings downtown to consolidate in 173,000 square feet of space in the new Broadway Tech Centre adjacent to the Renfrew Station.

Even so, such relocations aren’t causing a hollowing of Vancouver’s core. “The downtown market is still very much in the landlord’s favour,” MacDonald said.

Michael Geller, a Vancouver architect, planner and property developer, maintains transit-oriented development is here to stay. “There’s no doubt that it’s probably just more than the flavour of the month.”

Geller said that while such development has previously been a phenomenon in Canadian cities like Toronto and Montreal, it’s now coming into its own in Vancouver. “We are reaching a point where if new office development is not closely aligned with the rapid transit lines, it’s going to be much more difficult to lease out.”

Leasing of office space in transit-oriented developments in Vancouver may have slowed over the summer, but the demand is still there, according to the index for the third quarter of 2013.

Overall vacancy of buildings within 500 metres of a rapid transit station increased 70 basis points to 8.4 per cent since the first quarter of 2013.

At the same time, vacancy in office space lacking convenient access to rapid transit declined by 150 basis points to 10.2 per cent.

Even as the overall vacancy rate rose, the average rental rate for buildings within 500 metres of rapid transit stations increased slightly as tenants demonstrated they are still willing to pay a premium for buildings in close proximity to the SkyTrain and Canada Line, the index reported.

According to Jones Lang LaSalle, “The study reaffirms that tenants outside of Downtown Vancouver continue to gravitate toward office buildings within walking distance of rapid transit stations when evaluating their real estate requirements.”

Before the occupation of the Brewery District, the Class A transit-oriented office space vacancy rate sat at 79 per cent, but is now at 10.9 per cent, double that of space beyond 500 metres of proximity to a rapid transit station.

However, if the last remaining floor of the Brewery District was occupied, the transit-oriented space vacancy rate in New Westminster would drop to 0.6 per cent.