A new quarter-billion condo development is planned for Montreal. Developers Brivia Group and TG BECO announced in late September that they intend to build two, “shifted-block” 38-storey towers that will contain a mix of condos and luxury penthouses with 18 townhouses on the ground level.

The developers promise the project called YUL will be “a glittering embodiment of luxury urban living in the heart of downtown Montreal.”

Calling it a multi-phase project, the developers says YUL will ultimately contain 140,000 square feet of residential, retail and office space.

One of the features of the massive YUL development will be a central common for residents, containing a courtyard, a fitness area, an indoor pool, and an outdoor pool that will convert into a skating rink in the winter.

The architect for the project is Menkes Schooner Dagenais Letourneux. The firm carried out the design for casinos in Montreal and Mont-Tremblant, among other projects.

The landscape architect is NIPpaysage, which has a wide portfolio of projects internationally, including in China, India and England.

Among the amenities planned for the building are a two-storey lobby, a sky lounge on the 38th floor, and panic buttons in the garage.

The project is being built on the Overdale site, originally a piece of land considered for the future Telus offices of Montreal, according to Allison Lampert’s Montreal Gazette blog, which also says Ly is receiving Asian financial backing for the project. 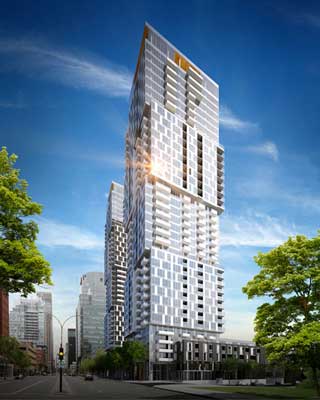 Lampert says Ly acquired the land for $29 million in 2011. Situated on the land is the historic Maison Louis-Hippolyte La Fontaine. La Fontaine become the first prime minister of what was then known as the United Province of Canada in 1842.

The house is not a designated historic site and Lampert reports the long-term plans are to demolish the residence.

The Brivia Group, the lead developer on the towers, has built several condo projects around Montreal. Its most recent, the 95-unit C3 Cavendish, is currently selling its first phase.

The individual behind the Brivia Group is Kheng Ly. On his Google + page, the Brivia Group’s president and CEO says he was born in Cambodia and survived the Khmer Rouge regime, spending many years in a refugee amp in Vietnam. He arrived in Canada in 1988.

His bio says Ly began working at the age of 18 in various jobs in order to support his family. “Through hard work, tenacity, perseverance, and resilience, Mr. Ly has been able to build a strong and successful business.”

Over the last 22 years, Ly has been a successful entrepreneur in the textile and garment business as well as in real estate investment and development, according to Ly’s Google + page.

The YUL condo development bucks the current trend, according to a recent Scotiabank report that said Canada’s major condo markets, including Montreal, are rebalancing.

The report, Global Real Estate Trends, cited potential imbalances emerging in Montreal and Vancouver and said builders are slowing the pace of new construction in order to reduce inventory.