Moncton moving ahead with sports and entertainment centre

The City of Moncton is counting on a new multi-use sports and entertainment centre to revitalize its ailing downtown.

Requests for proposals are being prepared for the centre the city envisions opening in 2017. It is expected to cost approximately $95.4 million and would seat between 7,500 and 9,000. 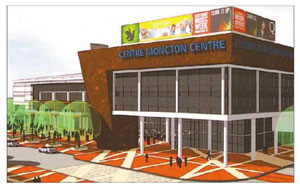 Bird Construction Inc. and EllisDon have been shortlisted as potential site developers, according to CBC News. Four different architects have already come before Moncton City Council with their renderings of a potential new centre.

Far more than a stadium, the city envisions the centre holding a restaurant, meeting spaces, potentially the city library and a museum, retail, an NHL-sized rink and a NBA-sized court. As well, the city imagines the centre would be the focus of a major civic transportation hub.

“It will make downtown more vibrant and prosperous,” says Moncton Mayor George LeBlanc. “I believe a downtown centre will be a catalyst for economic development and rejuvenation in the centre of our city.”

LeBlanc said the new centre should become a focal point, not just for the downtown, but for the entire region. “It has to be much more than just an arena, more than just a place to go for hockey games and concerts.”

The push for the centre began in earnest in 2012 when Crombie REIT  shuttered its 175,000-square-foot retail mall, Highfield Square. Located on downtown’s west side, the enclosed retail complex had fallen victim to larger suburban power centres and malls and when Hudson’s Bay announced it was leaving, the decision was made to close.

A report to city council suggested four of the site’s 11 acres would be needed for the centre, with the other seven potentially triggering $200-$250 million in development. The area could include residential, retail and office.

“The thing that’s driving it, especially for us in downtown Moncton, is it’s a catalyst to economic development for our downtown, and we really strongly need that,” says Anne Poirier Basque, executive director of Downtown Moncton Centre-ville.

“There are vacancies in our downtown,” Poirier Basque says. “We need something to generate the economy here and with the three communities, Moncton, Riverview and Dieppe, we feel that this is really what it’s going to take.”

An analyst’s report to city council confirms Moncton’s downtown is in less than great shape.

“Beyond the Highfield Square closure, the downtown also has some 350,000 square feet of vacant office and commercial space. The vacancy rate is rising to worrying levels,” consultant David Campbell wrote in his report.

Campbell noted that if even 60 per cent of the available space was filled, it would mean another 1,100 workers in the city core.

Campbell also points out that while overall city population has grown between 2006 and 2001, the downtown population actually dropped 9.1 per cent during that time.

A report from Sierra Planning and Management proposes a new downtown centre would attract between 316,800 to 396,000 people, with the estimate assuming 53 per cent of those would be for Moncton Wildcats’ Quebec Major Junior Hockey League games.

The lower attendance scenario would bring in more than $12 million in new, direct and offsite spending, while the higher estimate would attract $15 million to the downtown.

One of the inspirations for Moncton’s vision of a new centre has been London, Ont., where Budweiser Gardens opened its doors in 2002. According to Campbell, from 2001 to 2011, the number of people in the census tract surrounding the stadium grew by 30 per cent compared to 11 per cent for the London census metropolitan area.

Not all critics have favoured stadiums as a way to revitalize city centres, Campbell noted in his report. But he pointed out that “in many areas where new downtown centres have struggled, there was already substantial capacity for the economic activity and the new entertainment and sports facility was predicated on a dramatic increase in related activity.”

Campbell says that’s not the case with the proposed Moncton stadium, “which assumes modest growth in sports and entertainment activity . . .”

Beyond the economic stimulus needed for downtown, another reason exists to build the centre, according to Poirier Basque. The city’s existing coliseum isn’t suitable for a lot of larger shows, such as Cirque du Soleil.

It’s still unclear how the city proposes to fund construction of the new complex. In 2011, P3 Canada Inc. turned down the city’s request for funding, saying the infrastructure program had changed and that arenas were no longer eligible as projects.