Across many parts of Canada, the most miserable winter on record has delayed the start to recreational property sales and compressed the season for cottage goers. 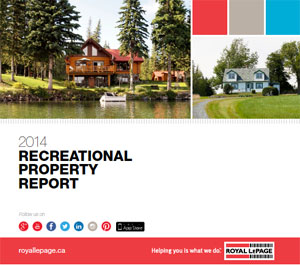 Royal LePage’s 2014 Recreational Property Report takes a birds eye view of various cottage regions across the country providing both buying and selling advise. According to the report, “It was a slow start to the market for getting cottages open and ready to go but the turning point to warmer weather has created an increase in activity.”

Winnipeg saw its second coldest winter in 75 years, Windsor the snowiest winter on record and even in temperate Vancouver, February was more snow and cold than in the past 25 years according to CTV News.

“We still had five feet of snow in April and the ice on Lake Winnipeg stayed until after the May long weekend,” said Winnipeg-based Royal Lepage Broker Jim Muir. “We had a similar situation last year but this year has been worse. When you think that it’s already mid-June and still cool, that makes for a short cottage season.”

“Our season (in the Rideau Lakes area of Ontario) normally starts after March Break but the ice wasn’t off the lakes until the end of April, water levels were high, many seasonal roads weren’t accessible because of snow, docks didn’t get in and properties didn’t list,” said Royal LePage Broker Pauline Aunger. “Once the market opened things did seem to start moving fast but that was because of the delay.”

The west benefits from the east

While eastern markets were hit heavily by the harsh winter, the west coast may have benefited. “We didn’t have such a bad winter here on the west coast, so weather has not been a factor,” said Vancouver- based Royal LePage Broker Gary Little. “This year sales of detached waterfront homes have been up slightly. I’ve been seeing more clients from Ontario and Alberta, so perhaps bad weather in the east has been beneficial in that it’s sending buyers here earlier in the year than usual.”

Little says the number of properties available in his area is quite high but he puts some of this down to sellers deciding to “put it on the market to see what happens.”

Kawartha Lakes’ Royal LePage Broker Linda Duncan says the entire real estate market is about 60 days late and that cottage sales are down about 15 per cent in her region. “Sales that have closed have been in the last 60 days. That could make it a buyers’ market for waterfront property that has to go.”

Experience and past trends dictate there are often two seasons for cottage sales – spring, driven people hoping to take advantage of a first summer at the cottage – and in the fall when owners take advantage of one last summer season before they list. “There can be deals to be had in the fall, depending on the reason for sale,” says Aunger referring to ‘end of an era’ sales in which long-time family cottages hits the market because of upkeep issues for aging parents and a lack of interest from next generations.

Muir says that second wave of sales in the fall is normal and this year hopes that will balance out the slow start. “In 2013 60 to 80 per cent of our sales were done by April. That certainly hasn’t been the case this year.”

For many, the idea of owning a cottage and in particular, waterfront property, is still a Canadian dream but the big question for many is the affordability of such a purchase. In April CMHC (Canadian Mortgage and Housing Corporation) announced it would discontinue its Second Home mortgage insurance effective May 31, potentially complicating affordability factors.  While some expected the move might create a rush to purchase property before the product’s elimination that has not been the case.

Royal LePage Broker Fred Lobb says the Second Home insurance had always been traditionally harder to get.  He says in the Lake Huron region where he is active people buying cottages are not traditionally those who need financial help. He says most of his buyers take advantage of home equity for second mortgages or lines of credit against existing properties.

In its announcement CMHC had stated its Second Home and Self-Employed Without 3rd Party Income Validation accounted for less than 3 per cent of its insured business, seeming to support the idea that the product has not been a prime resource for cottage buyers.

Muir agreed with the lack of CMHC use, in his case because average seasonal cottages can be had for as little as $75,000, making them attainable even with a higher down payment.  “Our market report asks about average 1,000 sq. ft. cottages on 100 ft. lots to compare apples to apples but here for instance we have a lot of older properties on smaller lots. There are lakefront lots available for $150,000 to $175,000 just on 50 ft. lots.”

Aunger says her experience is that people have taken advantage of the CMHC product but she isn’t concerned about the loss. “I see a lot of young couples who have the income to support the additional payments on a second property, who want to take advantage of a cottage when their family is young and certainly would have made use of the product.”

She says people forget though that there are other options available. “Genworth Canada and Canada Guaranty  both offer high ratio mortgages as well. They are less known but offer the same terms and rates.”

Aunger says this year there is more waterfront property available in the Rideau Lakes than ever before and that cottage ownership is more financially accessible in many parts of Canada than people realize.

The chart below shows the typical price range for standard in-land and waterfront properties across Canada in 2014 published in the Royal LePage report.