A snapshot of venues at the Sochi Olympic Games 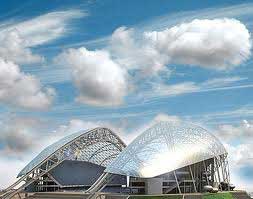 A stadium designed to look like a giant water droplet and an arena that evokes a puck are just some of the fantastical venues built for the Sochi Olympic Winter Games.

With the Sochi Winter Games getting underway, work is finishing up on 11 new arenas in the Black Sea coastal city of 343,000.

Populous, a global collective of architects known for – among other things – its large-scale work on big venues has built the Sochi 2014 Olympic Stadium. The $600-million Fisht Olympic Stadium (shown on left) has the capacity to hold 40,000 for the Russian city’s Opening and Closing Ceremonies.

Its shell-like design is meant to bring to mind jewel-encrusted Faberge eggs, while the building’s translucent polycarbonate roof will hold projected illuminations during the Games Ceremonies.

“Cool ice, cool palace,” Skobrev says in a statement on the Olympic.org website. “I really loved everything.”

The 3,000-seat Ice Cube Curling Centre is meant to echo the shape of a giant curling stone, while the same design playfulness extends to the Shayba Arena. “Shayba” is Russian for the puck which the new, round, 7000-seat ice hockey arena resembles.

At a cost of $27 million, the latter arena is designed to be dismantled and moved to another city following the Olympics.

The Bolshoy Ice Dome is even more eye-catching than the Shayba Arena. The 12,000-seat hockey arena resembles a giant, frozen droplet of water. “Glossy aluminum composite panels cover the shell of the building reflecting the surroundings and the changes of the daylight,” according to archdaily.com.

Another showpiece building at the Olympics is the Iceberg Skating Palace (shown in image below). Designed to hold 12,000 people, the venue for both figure skating and short track skating is meant to evoke the trajectory of a figure skater’s triple toe loop. 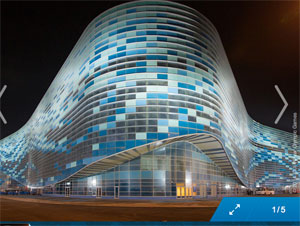 Other buildings constructed for the Games include a ski jumping centre; an “extreme” park for snowboarding and freestyle skiing; cross-country ski and alpine centres; and a sliding centre for bobsleigh, luge and skeleton competitions.

While the arenas may be the flashiest venues rising in Sochi, building has taken place on a grand scale in what was previously a regional summer resort. In all, 40 new hotels have been built with another 15 renovated, giving the city 26,000 rooms.

One project is the new Olympic Plaza, a 129,000-square-metre mixed-use development fronting the Black Sea. The project includes a new Olympic University faculty for sports business management as well as a separate conference hall capable of holding 750 people.

Other aspects of the development are a four-star hotel with 200 rooms; a 150-room five-star hotel; a 250-room student accommodation building; a 250-room apartment-hotel; and retail and leisure facilities.

Sustainability a key to venues

The venues are not only spectacular, but designed to be sustainable. According to the official Sochi website, “green standards” are being applied to the buildings.

Meanwhile, following the Games, the comparatively no-frills Olympic Village “will become one of the centres of sporting and cultural life in the surrounding holiday resort of Sochi,” according to the Sochi website.

“It will become a pedestrianized town, which will also have an Orthodox church, a Museum of Modern History, and a scale model of ancient Olympia.”

At $51 billion, the Sochi Olympics are the most expensive ever to be mounted in the history of the Games.