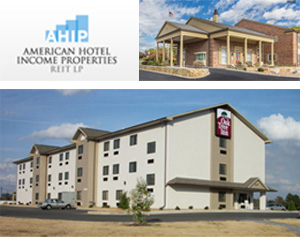 “Our IPO was about $100 million and we’re now at a market cap of about $330 million after going to the equity market three times to acquire various portfolios. Our target is to get over $500 million by the end of the year and to continue to grow.”

AHIP completed its previously announced acquisition of three Marriott-branded, select-service hotel properties in Ocala, Fla. for an aggregate price of US$30.8 million, excluding approximately US$3.2 million for brand-mandated property improvement plans, on Aug. 6.

“In the $30-million-to-$50-million range for portfolio acquisitions, they’re too big for local investors and too small for institutional investors,” said Lalani. “There’s this sweet spot of acquisition pricing that we’re able to capitalize on.”

AHIP also owns Marriott-branded hotel properties in Melbourne and Titusville, Fla. as part of its portfolio of 73 hotels, including 38 serving the American rail industry through long-term railway contracts and 35 affiliated with national and international hotel brands. Properties are primarily located in secondary and tertiary markets in the United States in close proximity to railroads, airports, highway interchanges and other demand generators.

AHIP announced on Aug. 24 it had agreed to acquire a portfolio of five strategic railway lodging facilities for an aggregate price of US$44.78 million, excluding closing and post-acquisition adjustments. They include: a 160-room hotel in Belen, N.M.; a 156-room hotel in Gillette, Wyo.; a 118-room hotel in Ravenna, Neb.; a 96-room hotel in Guernsey, Wyo.; and a 56-room hotel in Edgemont, S.D.

“It’s concentrated in very small markets with population bases of 2,000 to 5,000 people, and those are very difficult to finance so a local investor would have a really hard time trying to acquire that portfolio,” said Lalani.

The portfolio is secured by long-term lodging contracts with one of the top three railway companies in the U.S., which guarantee in excess of 80 per cent of the available guestrooms for terms averaging nine years. AHIP owns three Oak Tree Inn hotels contracted with the railway company, which Lalani declined to name, but he said the pre-existing relationship made it “a lot easier” to acquire the properties.

Railway companies pay for 60 to 100 per cent of the rooms in their contracted hotels for their freight line crews, whether they’re occupied or not, which provides stability for AHIP.

Demand for hotel rooms in the U.S. has been increasing by three to five per cent per year since late 2009, according to Lalani, while the supply has risen by under one per cent.

“Revenue per available room (RevPAR) has hovered between five and seven per cent for the last five years and July 2015 was the 65th consecutive month that RevPAR increased. This is a cycle that’s being driven primarily by demand growth and limited supply. The expectations are that this cycle will continue for at least the next 24 months while the supply-demand imbalance stays in place.”

Lalani said AHIP has consistently been on target with analyst expectations, which has enabled it to raise equity. The REIT’s debt to gross book value is around 51 to 52 per cent, in line with its goal of between 50 and 55 per cent.

“We recognize that at some point the hotel cycle is going to reverse course, and our plan is to have a really good portfolio of stable hotel assets with fixed long-term debt so that our cash flow remains stable,” said Lalani.

“The hotels we’re targeting are your typical four-storey buildings that are relatively new and don’t have complicated building systems, so you don’t have large capital expenditures as those buildings age.”

AHIP trades on the Toronto Stock Exchange in Canada and on the OTCQX International marketplace in the U.S. It earns all of its income and reports in U.S. dollars, though it trades and pays its distributions in Canadian dollars. While the two currencies were close to par when AHIP’s IPO closed, the Canadian dollar is now worth only about three-quarters of its American counterpart.

“If you look at our initial portfolio and investments, just by virtue of the changes in the exchange rate, they’ve become more valuable,” said Lalani.

While AHIP has looked at Canadian hotel property portfolios, Lalani said it focuses on the U.S. because it has about 10 times as many hotel rooms, more populous cities, less expensive prices, more generous commercial mortgage-backed security lenders and greater brand penetration.

“Marriott has five select-service products: Courtyard; Residence Inn; Fairfield Inn & Suites; TownePlace Suites; and SpringHill Suites. In Canada, you’d be lucky to find one or two next to each other. In the U.S., you’ll find three, four or maybe five of them right beside each other.

“They all target different segments of the market. Even though they compete against themselves to some extent, they’re targeting very specific markets and their pricing reflects their target market.”