Alberta design firm wins prize for 'warehouse of the future'

If you picture a warehouse as a large, empty box, you’d better think again.

An Alberta design and consulting firm’s re-invention of the warehouse into a futuristic distribution and fulfilment centre complete with residential space above has won a prestigious international prize. 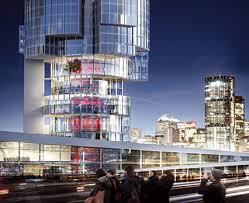 Riddell Kurczaba’s (RK) design for a 2020 tower dubbed The Swarm picked up top honours in NAIOP’s Building of the Future design competition. RK shared the award with Ware Malcomb, a California architectural design firm that pitched a massive computer and robotic warehouse.

For its 2013 competition, NAIOP invited member architectural firms throughout North America to conceptualize and design the distribution and fulfilment centre of the future.

“Just as the days of shopping via catalogues have gone by the wayside, today e-commerce is transforming yet again how consumers purchase and receive goods, and the resulting impact on commercial real estate could be far-reaching,” NAIOP’s president and CEO Thomas J. Bisacquino said.

“By addressing this dynamic now, designers are not only able to showcase the creative talent of their firms, but also identify potential logistical challenges, technological needs and cost savings, which in the end affect the overall consumer experience.”

In its winning submission, the company said the increasing on-demand model of consumerism will transform the way goods are stored, shipped, sold and received.

Its Swarm distribution centre attempts to anticipate this trend by “reorganizing and distributing the movement of goods through the use of a single intelligent network that streamlines channel volume, speed to market and personal delivery of all goods.”

RK proposes that private proprietary distribution channels will cease to exist and shipping companies will instead choose to share warehouse space; in fact, RK believes competing companies will even be able to access their competitor’s product where local demand outstrips immediate supply.

More than a holding place

In the proposal, the building functions as far more than just a holding place for goods. RK says it will also be “an agile mixed-use facility, offering retail fulfillment, entertainment, office and residential solutions as well.”

The building would incorporate vertical warehousing, allowing for the network to maintain, monitor and replenish inventory levels to retailers located at the building’s base. The ground level would contain retail, allowing for computer kiosk shopping and instant fulfillment of purchases.

Upper levels would be given over to flexible office and residential arrangements of various kinds.

While the Edmonton and Calgary-based design firm’s submission is something that is still off in the future, the company has plenty of practical experience as well.

For more than 20 years the company has planned, designed and constructed both light and heavy industrial buildings, delivering millions of sq. ft. of commercial, industrial and multi-tenant “big box” facilities.