REITS may have fallen out of fashion with investors in recent months, but Allied Properties REIT’s announcement of three recent purchases clearly signals it’s unwise to discount them just yet.

The Toronto-based REIT recently announced an agreement to purchase three properties for $69.2 million as well as a joint venture on a fourth property for $7.7 million. 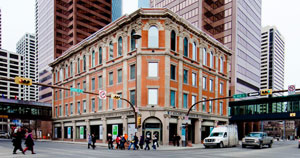 “We continue to find high-quality infill properties that fit squarely within our investment parameters,” Michael Emory, Allied’s president and CEO, said in a statement.

Allied has a strong track record of finding, acquiring and refurbishing light industrial buildings constructed in the 1800s and early 1900s in the core of urban centres and turning them into class-I office space, so designated by Colliers International. The “I” refers to the original industrial nature of the restored and retrofitted buildings.

On the strength of its acquisition criteria, the REIT has acquired and manages just under 60 million square feet of urban office inventory, representing one of Canada’s largest collections of class- I space.

The new purchases squarely follow Allied’s acquisitions pattern. The REIT’s Montreal acquisition on the northeast corner of Rue St. Paul and Rue St. Sulpice is an office property built in 1861 and renovated and upgraded in 2001.

The building has 79,778 sq. ft. of space and adds to Allied’s approximately 16 million sq. ft of office space in Montreal.

The other two purchases are both in Calgary’s centre core, where the REIT already owns approximately one million sq. ft. of class-I office space.

The Montreal and Calgary deals are expected to close in February and March of this year.

Allied also announced its fourth joint venture with RioCan REIT.  The most recent acquisition is a 50-50 deal completed in December 2013 where the two REITs intend to develop a mixed-use office, retail and residential complex.

The Toronto acquisition consists of 15,651 sq. ft. of land on the south side of College Street and the east side of Palmerston Avenue. The College portion has 90 feet of frontage and includes a heritage building with just over 10,000 sq. ft. of space.

A public lane separates the Palmerston portion from College and is currently used for parking.

In 2012, the two REITS announced they would begin working together to acquire stand-alone sites in city centres suitable for redevelopment or intensification.

The companies’ acquisitions to date include three other sites in Toronto, which they have targeted for mixed-use developments combining office, retail and residential. Diamond Corp., a land development company, also participated in a couple of the deals.