For many real estate companies, it has been a tough year to complete acquisitions. 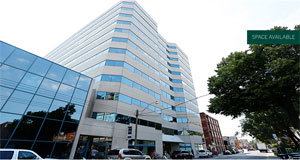 That has definitely not been the case for Allied Properties REIT (AP.UN-T), which last month announced two more deals to increase its 2014 tally to $225 million.

While the frenetic deal-making activity may have taken many observers by surprise, Allied anticipated the dam would break this year, according to Michael Emory, the REIT’s president and chief executive. “We got a sense late last year and early this year that the pace of acquisitions was going to pick up. It was more a function of availability than anything else.”

The REIT, known for acquiring older, trendy office space in the downtown cores of major Canadian cities, has racked up seven purchases so far this year, the latest two in Toronto: 555 Richmond Street West and 460 King St. W.

“I don’t think that we acquired anything much in Toronto, especially in terms of the stabilized rental property portfolio, last year or the year before that,” said Emory. “We did, of course, acquire The Well with RioCan and Diamond which is a very significant development project, but it is going to be very much down-the-road value creation as opposed to current income generation.”

Part of the lull in acquisitions last year can be attributed to the “wall of money” that is out there as everyone from private players to pension funds scour for yield-generating properties. Allied is also fairly demanding in its investment criteria and shies away from the more “commoditized” office properties, said the CEO.

“So, to actually see some very sound investment properties in Toronto, in our target markets that fit our focus, was really encouraging.”

Emory estimated the four deals made in Toronto this year totaled $145 million with the remainder of its 2014 acquisitions in Montreal and Calgary. Allied currently has properties in 10 Canadian cities with the largest concentrations in Toronto, Montreal, Calgary and Vancouver.

The most recent deals, announced late last month, are headlined by 555 Richmond Street West (shown in the image). The 12-storey, 297,246-square-foot office building, purchased for $100 million, is adjacent to a cluster of four properties the REIT owns on the southeast corner of Bathurst and Richmond St. and will be expected to generate rising rents.

“It generates a very significant return out of the gate,” Emory said. “That’s one we think we can augment meaningfully over the next 24 to 36 months because of the difference between in-place rents and market rents.

The acquisition, along with the four other properties at Bathurst and Richmond, present the REIT with some development potential over the long term. 555 Richmond has about 21,000 square feet of excess land to the south and could take part in a future development plan.

460 King St. West, located at the corner of Spadina Avenue and acquired for $15 million, is a four-store, 20,000-sq.-ft. heritage redevelopment property built in 1875. It is also close to other Allied holdings and represents a future development play.

“What we see doing there is redeveloping it to a high standard in the near term, generating a lower yield on our capital,” said Emory, “but then say five years down the road combining it with 78 Spadina – which is currently a parking lot – for a very significant large-scale intensification opportunity that could be very interesting.”

“They are in a way very different ends of the spectrum,” he explained. “460 King will become part of Allied’s development portfolio for the next 18 to 24 months while we restore it to a very high standard and re-tenant it with very high-calibre tenants that will give us a respectable holding return on our investment.”

The two latest properties will come with no debt.  Last month, the REIT made a public offering of 4,887,500 units from treasury at a price of $35.30 apiece for gross proceeds of just over $172.5 million. That offering more than bankrolls the acquisitions and  the remainder of the capital “recharged” Allied’s balance sheet. “We basically locked in the equity for these investments, more or less concurrently with making them.”

Allied is well-positioned for future acquisitions and does not expect to go back to the equity markets for more capital unless it finds a monster deal.

“We have extraordinary liquidity following the bought deal we did, we have an extraordinary low debt ratio and we will soon be able to access, we believe, unsecured debenture financing with an investment-grade credit rating,” said Emory, “so it is highly unlikely, unless we do a very large transaction, that we would go back to the equity capital markets.”

Allied currently has a debt-to-equity ratio of 35%, putting it in good company with the likes of CREIT and Boardwalk REIT.

Emory does not expect its August additions to be the last of 2014. “We have nothing under contract at the moment, but we do expect to make additional acquisitions over the remainder of the year. They will certainly be in one or more of the ‘big four’ cities.”

The REIT CEO is hesitant to make any predictions for 2015, however.

Snapping up more downtown properties close to what it already holds and building critical mass will continue to be a focus for Allied, he added.

“Certainly our cost of capital favours that and I believe the availability of properties that fit our very tight investment and operating focus will continue. So if the availability is there, we will certainly take advantage of it.”