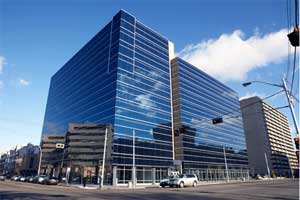 The Edmonton office market remained relatively steady in the third quarter, with vacancy rates dipping to 9.6 per cent from the second quarter’s 9.7 per cent.

The company’s third-quarter report shows Edmonton’s suburban office market recorded a 13.6 per cent vacancy rate, down four per cent over the previous quarter, thanks to two main deals in the city’s 124th Street market:

* Stantac, an engineering, architecture and planning company, expanded into the last two vacant floors in the Devonian Building (shown in picture), at 115 Street and Jasper Avenue, absorbing 42,000 square feet;

* Lloyd Sadd Insurance took 22,500 square feet over three floors on a 10-year lease in the Guardian Building located on the corner of 124th Street and 102nd Avenue.

Though the majority of Edmonton’s 26 million square foot office space is located downtown, the suburban market is increasing with new construction expected to add to its current 10 million square feet.

“There’s a fair bit of activity in suburban leasing, with a lot of developers building offices off the Anthony Henday Drive (Edmonton’s ring highway) in the Summerside area east of Calgary Trail and there’s lots of development in the Windermere area and the west end,” says Asbell.

Suburban office space holds an appeal for engineering, construction and home building companies who look to the suburbs for their lower rental rates. On average, suburban lease rates are about $33 per square foot, significantly lower than the average $45 per square foot for downtown Edmonton office space.

Suburban space also offers more and often free parking for staff and visitors in a city where downtown parking is getting scarcer and costlier.

And there’s the Fort McMurray factor.

Oil and gas, engineering, construction and services firms looking at leasing space in the oil sands capital often blanch at the $68-$73 per square foot costs of space and choose instead to locate in Edmonton.

The question is: Are the higher vacancy rates in Edmonton suburbs compared to downtown office space the result of developers building on spec?

Not building on spec

“Not many developers are building on spec in the suburbs,” says Asbell. “However, we have seen a fair bit of development where a group builds 30,000 to 60,000 square feet and takes 25 – 50 per cent of the building and therefore there is additional supply which pushes up the vacancy rate.”

New construction in the city core

The new $604.5 million downtown arena begins construction this spring and plans are moving forward for the $850 million Galleria performing arts and academic centre.

Construction on the former Kelly Ramsey Building, gutted by fire in March 2009, is expected to start soon. Developers of the site have decided against moving forward with a hotel being part of the development and will instead focus on office space with main floor retail. More than 100,000 square feet of office space is pre-leased in this project.

“We’re also seeing a shift in development with more new buildings providing main floor retail space, two or three levels of commercial office space and residential above,” says Asbell, noting the change in Edmonton development is likely to continue around the arena development.

And, now that the civic election has installed a new mayor and council, a decision is expected on whether the City of Edmonton will move forward with its request for proposal for a new office building.

The real estate market is waiting to see if the city will move forward with a new development, which is expected to put downward pressure on rental rates.