And the TOBY award winners are …

You could say it’s a big prize for a big building.

Place Victoria, home to the Montreal Stock Exchange, won The Outstanding Building of the Year (TOBY) national award for a building over one million square feet.

And, according to award granter Building Office and Manager’s Association of Canada (BOMA), that’s no easy task.

Managed by Magil Laurentian Realty Ltd., Place Victoria (shown in the picture below) was one of 13 buildings from across the country to be honoured for its excellence in building management at this year’s BOMEX 2013 conference in Halifax.

Bentall Kennedy (Canada) LP was the big winner this year. Three of the buildings the real estate investment and advisory corporation either owned and/or managed won awards. 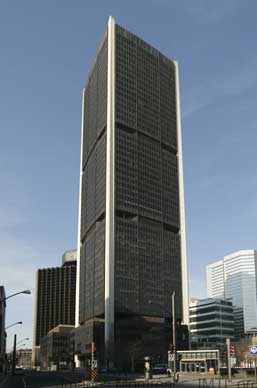 Magil Laurentian Realty Ltd. and Cadillac Fairview Ltd. tied for second place with two buildings apiece. The full list of winners may be found on the BOMA Canada website.

Charles Rate from SNC Lavalin O & M in Toronto received the 2013 Chairman’s Award.  The award is given for longstanding leadership and commitment in service to BOMA and its members. As president of SNC-Lavalin, Rate is responsible for leading Canada’s largest operations and maintenance service provider.

He has worked as project manager and director of engineering on major crown projects in the defence and telecommunications sectors and extensively on infrastructure projects in Canada, Europe and Asia.

Benjamin Shinewald, BOMA’s president and CEO, likens the competition for the awards to the Olympics. “These are really high-performing buildings,” he said.

“They’re extremely well-run. It’s sort of like the Olympics, where a 10th of a second can make the difference as to who wins gold and who wins silver. It’s super-close in terms of who can win this award in this and that category.”

Categories for the TOBYs include corporate facility, historical building, shopping centre, suburban office park, and five categories for buildings of varying square footage. Other awards include the Pinnacles, for “standards of excellence to which all BOMA members and their employees should aspire to.”

Debbie Prince, BOMA’s manager of member services who runs the awards program, said each building has to achieve a point score minimum of 70 per cent to earn a chance at a TOBY.

The buildings are graded on a strict and thorough set of criteria and judging at the local level involves a site inspection in which the judges review documentation and tour the building.

All entrants are also required to have BOMA BESt certification.

“It’s a quantitative, dispassionate, scientific process as opposed to a qualitative, artistic one,” Shinewald said. “We don’t have people walking around saying, ‘It’s got beauty and this and that.’ That’s not what we’re doing here. It’s about managing an existing building. ‘Given this building, how well are they managing it?’ And the better they do, the higher the score.”

Each of the categories carries a weighted score. Discussion of the building standards, which is an overview of the entrant’s structure, is worth two points, while areas such as tenant/customer relations is worth 15 and energy conservation is worth 20.

BOMA International first began the TOBY awards in 1985. Not every category is currently included at the international level, Prince noted. For example, the shopping centre category will be admitted to international competition for the first time in 2015.