Scott Andison, recently appointed president and CEO of the Federation of Rental-Housing Providers of Ontario (FRPO), has a pretty long to-do list in his new role. 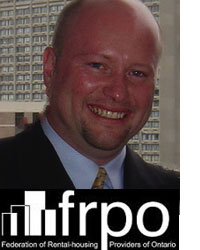 Chief among them will be to get the industry heard at Queen’s Park.

“When we can go to government and say, ‘This industry in Ontario represents $18.3 billion in GDP to the province and you see where we rank much higher than a lot of other industries that quite frankly do get a lot more attention, we are starting to shift the conversation a bit,” said Andison.

For example, the commercial rental industry invests more in capital each year than the province does in GO Transit and highways combined.

As part of that push, FRPO released a study in December 2013 titled The Economic Impact Assessment Study Ontario Rental Housing Sector based on research conducted by KPMG. The study detailed the Ontario’s rental housing industry heft: besides the contributed over $18.3 billion GDP tally for 2012; 147,000 full-time jobs and $7 billion in tax revenues to governments and more than $4.5 billion invested in housing infrastructure in 2012.

FRPO is not done with the creation of reports outlining the importance of the rental industry to the province. The association is currently in the midst of revising a new building policy with outside economists and other experts “which will be based on some pretty firm evidence and statistics in terms of forecasts” that Andison hopes will give it a greater voice in the political process.

The association wants to talk “very clearly and succinctly about what we see in the future and what kind of government support we would be looking for. Not financial support, but just in terms of commitment and longer-term thinking in terms of policies and legislation that supports new development.”

He expects the new building policy to be completed within months.

Andison brings a mix of government relations, board management, and association leadership experience to the role. A former Progressive Conservative staffer under the Mike Harris-led Ontario government, he was formerly chief of staff to the Minister of Finance and Education and the national practice leader for property tax with Cushman & Wakefield.

He has also served in senior director and CEO positions with provincial and national industry associations and has held management positions with the Ministry of Municipal Affairs and Housing, and the Ministry of Health and Long-Term Care. He replaced Vince Brescia who was the organization’s president and CEO since 2000.

Andison’s mandate from FRPO’s board of directors is to first steer it through a climate of political uncertainty – the province is currently run by a Liberal minority gearing up for another election as well as a push to support the rental housing industry in Ontario and beyond the province’s borders.

“One of the mandates is to look at how we work better together and what kind of allegiances and alliances would help support the common mandate.”

“Previously they had been exempt and we believe there was a good policy reason as to why there we exempt,” Andison explained. “Municipal licensing in our opinion is an unnecessary tool, they already have sufficient tools to manage locally in terms of zoning and planning regulations, building standards, bylaws, etc.

“So this was an unnecessary bureaucracy that is quite frankly stifling investment.”

FRPO is also pushing for a change to the way the province assesses and taxes multi-residential properties. Currently multi-res properties are taxed at a rate three times that of a single-family home per assessment dollar, according to association.

“When we have government at both the provincial and municipal levels saying that they are trying to find more ways to help tenants who are in need, it is difficult to be able to say that and then having to say they are supporting or allowing to continue inequitable tax treatment,” said Andison. “That is jacking up rental costs and if we can get the assessment and tax issues resolved, those savings immediately flow through to the tenants.”

FRPO is taking a “two-pronged” approach. It is looking at a better assessment policy approach from the Ontario Ministry of Finance along with the Municipal Property Assessment Corporation and revamping how it assesses buildings so that it is done fairly and incorporates best practices from other jurisdictions. As well, FRPO is exploring how municipalities are setting up their tax ratios and how they are treating multi-res properties.

“We have started that discussion with government, we have received some encouraging feedback in terms of their interest in helping to resolve this and FRPO is actually embarking on putting together the policy evident to support the position,” he said.

The FRPO chief’s property tax background with Cushman & Wakefield makes the issue “near and dear to my heart,” he said. “There is no justification as to why a multi-res property should be paying a much higher tax rate than a single-family home. Particularly when they are already responsible for their own garbage collection, they have a number of things around fire suppression and their own maintenance of lands.”

To spur new construction of multi-res buildings, FRPO is hoping to champion changes on a number of fronts.

“We are looking to breaking down what I am calling the barriers to new construction,” Andison said. “Tax treatment is definitely one, that is an impediment. The other things are around development charges, the education tax side of things. I will call it challenges around the municipal approvals that need to take place.

“Again, we have both levels of government saying we need more construction of rental housing stock. At the same time they are making it very difficult for developers when they are looking at opportunities to build purpose-built rental housing. Quite frankly, if it is too difficult in Ontario, they are taking their dollars into other provinces.”

Rather than new apartment buildings rising up across the province, the trend has favoured the construction of condominium towers which have served in many cases as de facto apartments as owners rent them out. The trend has taken pressure off the rental sector, but Andison warns it could end at any time.

“There may come a time when those investment condos become owner-occupied and they are removed from the rental market. We could actually see a real crunch if that were to take place. It doesn’t take much in terms of a shift in the short-term rental return side of things that could cause owners of one, two, three units to all of a sudden not want them for rental anymore.”

The condo boom has saved the province from a housing crisis, he added. “If we did not have that condo development going on here, we would have a significant crisis in available rental housing. The Ontario government has been very fortunate that there has been a condo boom in the GTA.”

FRPO has also targeted the province’s rent control and rent dispute process for change, arguing that the system as it is currently is a major reason so little new construction has come on stream.

As well, it would like to see government get out of the multi-res construction business.

“We’re very much in favour that government’s role should not be in the bricks and mortar but it simply should be in assisting those tenants that require it and they can apply whatever income test that is appropriate for government to use. Let the private sector and the not for profit sector work on supplying the demand.”

The “vast majority” of Ontario’s existing multi-res rental stock are buildings erected prior to 1991 that are subject to rent caps.

“There was a whole host of conditions that contributed to that stagnation in new development from a policy side, from an economy side, but we are seeing some of them breaking down. To build on that momentum we are hoping to remove some of the others.”