Ivanhoé Cambridge and co-investor and developer Hines have landed Mead Johnson Nutrition Company as a future tenant for their 52-storey River Point tower under construction in Chicago’s West Loop area. 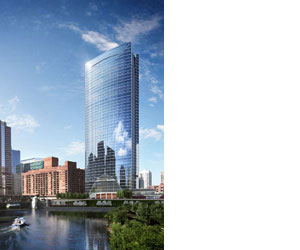 “River Point will be a game-changer in the Chicago market,” Ivanhoé Cambridge vice-president of public affairs and media relations Sébastien Théberge said of the tower at the corner of Lake and Canal Streets. “Pre-leasing activities are underway and the tower is being erected as we speak.”

Mead Johnson, a global leader in pediatric nutrition, has signed a lease to relocate its corporate headquarters to River Point from its current location in Glenview, Ill. It will occupy three floors totaling approximately 75,000 square feet of space in the mid-rise of River Point and will move into the building in mid-2017.

“The first part of this project was to build a platform over the rails next to the river,” Théberge said of the structure that will offer a gross leasable area of approximately 1.05 million square feet when completed.

“It’s a transit-oriented development where commuters will have direct access to the tower as well as other amenities that will be world-class. It will be a beautiful addition to the Chicago skyline and we’re very proud to have Mead Johnson join us as a tenant.”

The Pickard Chilton-designed River Point will include a 1.5-acre public park and landscaped river walk, retail shops and a fitness centre, while providing extraordinary views of the Chicago River. The class-AA building has been designed to achieve LEED Gold certification.

“We operate in a competitive category and hold ourselves to the highest standards of quality, innovation and effectiveness — and we expect nothing less of our facilities,” Jeff Jobe, Mead Johnson’s senior VP of technical operations, said in a release.