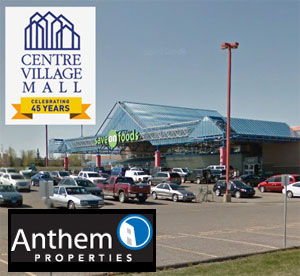 “There was tremendous opportunity to re-energize this mall: Save-On-Foods‘ desire to have a new state-of-the-art store, London Drugs wanting to relocate to Centre Village Mall in a new store, and the departure of previous tenants,” said Anthem vice-president of business development Bob Tattle.

“All of this allowed us the opportunity to better serve the needs of tenants, customers and the Lethbridge community.”

The company purchased the mall in 2006 and is spending $26 million on the overhaul, which is expected to be completed by early fall in 2016.

Save-On-Foods will move from its current location in the mall to a new 43,000-square-foot space at the west end, where a recently-demolished Zellers stood. London Drugs, a new anchor tenant, will occupy 40,000 square feet right next door to the Zellers. A 9,000-square-foot pad is being built for Dollar Tree, which is relocating from the mall.

The redevelopment also includes substantial exterior upgrades to the enclosed mall. It includes more than 25 stores, many of which are independently owned and operated. Among the chain tenants are Canadian Tire, Mark’s, Shoe Warehouse, RBC, A&W and Smitty’s.

Anthem’s other Alberta retail assets are in Edmonton, Calgary, Hinton and Lacombe.

“Retail centres that are well-located, well-anchored and well-managed almost always perform favourably, and our portfolio is no exception,” said Tattle. “Major changes to a mall, such as the departure of Zellers, require considerable thought, capital and work to find a suitable, productive and profitable replacement.

“We thrive on any challenges presented by our centres and take pride in solving problems. Generally, throughout our portfolio in Alberta and B.C., occupancy has been consistently high.”

The Anthem portfolio is comprised of more than 3.5 million square feet of commercial space, 40 acres of urban and suburban land held for future development, and approximately 3,500 residential condominium units either in the design/development stage or under construction.

Anthem has invested in, developed and/or managed — alone or in partnership — more than 210 projects in Western Canada with a cumulative historical value of approximately $2.5 billion.

Thurston Street, a community comprised of 57 townhomes in Burnaby, B.C.’s Metrotown neighbourhood, sold out in record time and is now fully occupied.

The condominium portion of the LOCAL on Lonsdale mixed-use development at the corner of Lonsdale Avenue and East 17 Street in North Vancouver recently sold out. The retail portion of the 20-floor building will be anchored by a 42,000-square-foot grocery store.

Maplewood Place is a community of 61 North Vancouver townhomes with three-bedroom three-level, two-bedroom two-level and one-bedroom single-level plans that range from about 500 to 1,400 square feet. The development will include underground parking, community courtyards with interactive children’s play nodes and a salmon-bearing creek.

Station Square will encompass five residential towers ranging from 35 to 57 storeys with 1,800 homes and more than 450,000 square feet of new retail and office space in Burnaby’s Metrotown. Beedie Living is Anthem’s joint venture partner on the project.

“Station Square’s first phase is sold out and homeowners will be moving in this fall, plus the second phase is now 90 per cent sold and construction is well underway,” said Zayadi.

Parkside West at Waterfront is the final phase of the waterfront master-planned, mixed-use community in the Eau Claire area of Calgary next to the Bow River, Prince’s Island Park, Chinatown and the downtown core. It includes 71 homes in a nine-storey terraced concrete building. It’s 85-per cent sold and construction will start this fall.

Erlton is a 5.4-acre site at the intersection of Macleod Trail and 25th Avenue in Calgary acquired in 2006. It’s envisioned as a transit-oriented development with a mix of retail and residential components.

“The Erlton site is going through the final phases of city approvals and we hope to bring these homes to market early next year,” said Zayadi. “Additionally, there will be some excellent retail opportunities in this community.”