Calgary’s office sector has taken a beating since the bottom dropped out of oil prices early this year, but the city’s market for multi-residential properties has remained strong. 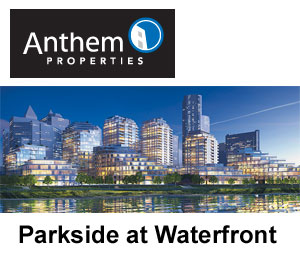 “Despite all these layoffs you’re hearing about and the drop in oil prices, there’s still a lot of investment in the energy sector in Alberta, even though it’s not as much as everyone hoped it would be,” said Anthem Properties Group vice-president of development Paul Faibish.

“People are choosing to live in Calgary whether or not they’re in the oil and gas sector. We see Calgary continuing to be a desirable place to live and that people will want to come to.”

Residential building permits have outstripped non-residential permit volumes in each of the past five years, with 2015 year-to-date permits totaling $2.2 billion versus $1.6 billion in all non-residential sectors combined, said a release from Anthem.

Contributing to the robust residential permit numbers is Anthem Properties’ massive Waterfront condominium development in Calgary’s Eau Claire neighbourhood along the shore of the Bow River.

Construction began in 2007 and once complete in the spring of 2018, Waterfront will be a mixed-use community made up of 10 buildings and more than 1,000 homes. The first two buildings were completed in 2010 and 2011 and are occupied, while two more are currently accepting their first residents.

Alberta’s construction industry employed 258,000 in August and more than 250 direct construction jobs will be created for the final phase of the development.

Breaking ground for the next phase

The next phase of Anthem’s Waterfront development, Parkside at Waterfront, had its groundbreaking ceremony on Oct. 1 and construction will begin any day now.  The project is comprised of six buildings ranging from five to 18 storeys with a total of 382 units. About 85 per cent of the units are already sold.

“We’re seeing a lot of well-located urban nodes of transit-oriented development being supported by more densification within the city,” said Faibish. “Waterfront’s a great example of this because it’s a mixed-use community with some retail that was part of the first phase and is operating now.

“We have coffee shops, hair salons, restaurants and amenities within the community for the residents, but it’s also two blocks away from the downtown core and the +15. You can get anywhere you would need to be within the downtown very quickly and very easily.”

Anthem is also completing construction of Maplewood Place, a community of 61 North Vancouver townhouses with three-bedroom three-level, two-bedroom two-level and one-bedroom single level plans that range from about 500 to 1,400 square feet.

Private sales appointments were held last week and public sales will open on Oct. 17. Purchasers should be able to move in before the end of the year.

“It’s been very well-received and we think it fits in nicely with the community,” said Faibish. “It’s the type of housing that people seem to be needing on the north shore and it’s filling a niche.”

Move-in began at the sold-out 269-unit first tower of Anthem’s Station Square mixed-use development in Burnaby’s Metrotown neighbourhood a few weeks ago. It will eventually include five residential towers ranging from 35 to 57 storeys with 1,800 homes and more than 450,000 square feet of new retail and office space.

A shopping centre at the opposite end from the residential tower is now complete, and a few retailers have opened their doors. Bed Bath & Beyond and Best Buy will start operating soon.

The Anthem portfolio is comprised of more than 3.5 million square feet of commercial space, 40 acres of urban and suburban land held for future development, and approximately 3,500 residential condo units either in the design/development stage or under construction.

Anthem has invested in, developed and/or managed — alone or in partnership — more than 210 projects with a cumulative historical value of approximately $2.5 billion in Western Canada.