Apartments flagged by PwC survey as attractive investment for 2014

“For rent” apartments are being touted as “an extremely attractive investment choice” in a new PricewaterhouseCoopers report.

Emerging Trends in Real Estate 2014  provides an outlook on real estate investment, development trends and other real estate issues through North and Latin America. The report, prepared by PWC in conjunction with the Urban Land Institute, reflects 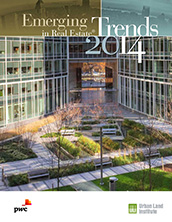 the views of more than 1,000 individuals who completed surveys or were interviewed as part of the research process.

At the same time, 46 per cent of respondents recommended holding, not selling, rental apartments in the major markets.

While condominiums are being developed at a furious pace, respondents to the PwC report remained confident the apartment market would not be adversely impacted, despite the fact condos in major markets are often bought and then rented out, causing pressure on other types of rentals.

Calgary is the exception, where – according to the report – an oversupply of condos has reached the point where one interviewee expects them to flood the rental market.

In Toronto and Vancouver, speculation exists on whether the condo market is over-built and will result in a bubble. But the report maintains that natural household growth and immigration has been sufficiently strong to absorb the units coming onto market.

The report notes that if the number of condo units being built begins to slow, demand could lead to rising rents.

“Rising rents in condominium rentals could help improve the economics of purpose-built-for-rent apartments,” the report said, noting that in the future such apartments could form a more significant part of the housing stock.

The report suggested that if fewer condos become available and interest rates push house purchases beyond what consumers can afford, rental apartments might become the viable alternative.

That said, a number of barriers to developing large-scale rental buildings currently exist, including the difficulty of obtaining appropriate development sites and a longer time horizon that limits the number of investors who might be interested in that kind of development.

As for the REITs

Among other topics, the PwC report also looked at the REIT landscape and anticipated an expected drop in REIT activity with pension funds and foreign investors becoming slightly more active in the year ahead.

Rising interest rates are hampering REIT activity, causing the cost of capital to rise from 4.5 per cent to 6.5 per cent, according to one report interviewee. Higher costs will make REITS more selective in their acquisitions.

The report speculated that consolidation could occur among small and mid-sized REITs, but said such consolidation will have to add to shareholder value.

Of course, the big REIT story of 2013 has been the spin-off of commercial real estate holdings in the retail market into separately listed REITs.

One report interviewee called that market “a limited universe,” but the report noted that “it will be interesting to see if similar deals are cobbled together by Canadian companies in other industries that have sizeable real estate holdings across the country.”