Automotive Properties REIT (APR.UN-T) has raised $81.2 million since its July 22 initial public offering and has consistently traded around its $10 opening price. 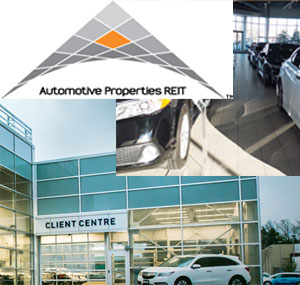 “We are confident that as we establish a track record of successfully advancing our business strategy and generating stable and growing cash available for distribution, our unit price will reflect that,” said Automotive Properties REIT president and chief executive officer Milton Lamb.

It has cash and a revolving line of credit valued at approximately $27 million and Lamb said, “We have the ability to acquire over $50 million and will look to tap equity markets as part of our acquisition program and on a strategic basis.”

The REIT has 26 income-producing commercial properties representing approximately 958,000 square feet of gross leasable area primarily centred in and around Vancouver, Calgary, Regina and Toronto. It’s in acquisition discussions with dealership owners and dealership group owners in strategic markets across Canada.

“We will continue to focus on brand and geographic diversification,” said Lamb. “Two markets we are particularly interested in right now are Montreal and Alberta.”

Lamb said Automotive Properties REIT provides a solution for established single dealership owners since “PWC’s 2012 Automotive Trendsetter Report” indicated that approximately 70 per cent of owners wanted to be semi- or fully retired over the next five years, and 91 per cent of them own the property underlying their dealership.

The REIT can also benefit dealership groups focused on consolidation by enabling them to monetize embedded capital from their real estate and redeploy it in their existing portfolio or fund an acquisition program, according to Lamb.

“The industry consolidation trend is being driven by the increasing sophistication of the auto dealership business and growing capital requirements. The benefits of scale and the inherent efficiencies of a multi-location business model provide a competitive advantage.”

Things are still more fragmented in Canada, which has about 3,500 dealerships. Approximately two-thirds are owned by individuals or small dealer groups with fewer than five locations. The top 10 dealer ownership groups in aggregate comprise less than 10 per cent of the market.

The REIT has a right of first offer to acquire any and all REIT-suitable properties from Dilawri Group. The company has, on average, opened or acquired five new dealerships annually for the last five years.

There are three development properties comprising 97,000 square feet of gross leasable area in the Dilawri pipeline, and Lamb expects them to be ready for consideration within approximately 18 months.

“Even during periods of economic weakness, automotive dealerships have shown highly stable profitability,” said Lamb. “In fact, during the financial crisis of 2008-2009, average dealership gross margins actually increased, highlighting the fact that, even when new car sales are slowed by the economy, the dealership business remains robust due to the offsetting strength of the parts and service component, which is supported by manufacturers’ warranties.”

Automotive Properties REIT paid its initial cash distribution of $0.089 per unit on Sept. 15. It intends to make regular monthly distributions of $0.067 per unit, representing $0.80 per unit on an annualized basis, on or about the 15th day of each month to unit-holders of record.