After more than two decades with Avison Young, Jonathan Pearce has cut ties with the Toronto-based real estate advisory firm for another challenge: filling the proposed Ivanhoe Cambridge–Metrolinx development at 45 and 141 Bay Street. 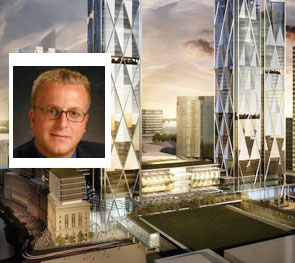 Plans have been submitted to the City of Toronto for the joint development which, according to a report in the National Post last month, would be anchored on a new bus terminal and include a 48-storey office tower.

There are even leaked drawings of the project, which are credited to Wilkinson Eyre Architects and feature the name of U.S. builder Hines.

Ivanhoe would not comment on the scope of the project, which currently does not have an anchor tenant, but did confirm Pearce was been appointed senior vice-president, office leasing, with responsibility for the 45/141 Bay project. He will report to Arthur Lloyd, executive vice-president, Global Investments.

Ivanhoe Cambridge, the real estate arm of Quebec pension giant Caisse de dépôt et placement du Québec, noted Pearce “has more than 20 years of experience in office leasing and the sale of corporate investment assets in multiple markets across Canada, with a strong focus on landlord agency in Toronto’s downtown and midtown submarkets.

“He has extensive experience in leasing, sales, financial modelling for leasing and conducting negotiations. Jonathan has a successful track record with complex and innovative leasing transactions on some of Toronto’s most recognizable office buildings.”

The Montreal-based real estate company added their newest executive has “long-standing relationships and a vast network of contacts within the real estate community.”

Pearce, who is scheduled to start with Ivanhoe next week, has a B.Sc. Honours in Urban Land Economics from Sheffield Hallam University in Sheffield, England and is a Professional Associate of the Royal Institution of Chartered Surveyors.  His LinkedIn page still lists him as a senior vice-president and principal (owner) at Avison Young.

Both sides of the tracks

The 45/141 Bay project would continue the recent trend that has seen increased development take place in the emerging “Downtown South” which is situated south of the railway lands that once created a southern barrier to development.

What is unique about 45/141 Bay is it would be the first such development to straddle those railway lands.

According to the proposal outlined by the National Post, zoning review applications filed with the city suggest the project includes the construction of an elevated park over the rail corridor, a first for Toronto.

The inclusion of Metrolinx is part of an effort to bring more transit integration to the city. The development would result in the relocation of the city’s bus terminal from its gridlocked location in the Bay and Dundas St. area to a spot at 45 Bay St. (currently a parking lot) where it would be a stone’s throw from Union Station, the subway and the GO bus terminal.

The scope of the development could be bigger than those preliminary applications suggest. The drawings from Wilkinson Eyre Architects depict three towers as well as the multi-storey podium over the railway corridor.