Avison Young‘s inaugural Spring 2014 Canada, U.S. Industrial Market Report highlights the potential benefits on both sides of the border from an “economic rebound as industrial/retail product is redefined.” 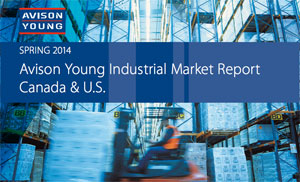 “This report demonstrates that industrial/retail product is being redefined in Canada, the U.S. and globally as the Internet plays an increasing role in the sale of consumer goods,” Mark E. Rose, chair and CEO of the Toronto-headquartered firm, said in a media release.

“The impact of this evolving product on the industrial real estate market will become even more positive as the American economic recovery continues.”

“These features are aimed to secure leases from major domestic and U.S. retailers with near-term plans to expand or establish distribution networks as part of their e-commerce and omni-channel strategies, which are marrying warehouse/logistics and retail.”

The release says the “Canadian industrial market collectively reported a vacancy rate of 4.6 per cent, up 20 basis points (bps) year-over-year in the first quarter of 2014” with Ottawa reporting the lowest vacancy rate at 2.8 per cent and Guelph reporting the highest at 6.8 per cent. Across the country, single-digit vacancy rates remain.

Not surprisingly, the report indicates Toronto is the biggest development market with 2.6 million square feet underway (29 per cent share of the national total) primarily within the Toronto west submarket. Vancouver follows at 2.2 msf.

Toronto, which trails only Chicago among North American industrial markets, is “seeing an increased focus on warehousing, logistics and distribution, with some of the largest logistics and supply-chain management companies operating facilities across the region.”

The GTA and Toronto West lead the way in rental-rate growth, “as the submarket has become the focal point for new development, thanks to increasing demand for logistics and distribution-centre space from major international (Amazon) and domestic (Canadian Tire) retailers. While e-commerce and omni-channel retail strategies will continue to transform the marketplace, the GTA will also benefit from recovery in the U.S. economy.”

Driven then by e-commerce, warehousing and supply chain demands, the report notes a trend in the design of industrial facilities since 2013 also includes energy-efficiencies and low-maintenance designs through higher-grade materials.

The report predicts a softening in the market over the short term as newer, more efficient projects are brought to market, and notes that “early indications can be seen, such as the flattening vacancy, availability and rental rates in GTA West” and indicating an increasingly competitive environment.

The Reshoring of industrial

“Rising costs overseas are bringing manufacturing back to the U.S., and reshoring will be an important trend this year as companies move to shorten the supply chain and control costs,” said Earl Webb, Avison Young’s president, U.S. operations. “Necessary speculative development will spread to more cities as the overall market continues to improve in order to keep pace with increased demand from retailers and others for modern industrial product.”