Avison Young, which calls itself “the world’s fastest-growing commercial real estate services firm,” this week announced its first foothold in continental Europe with the opening of a new office in Frankfurt. 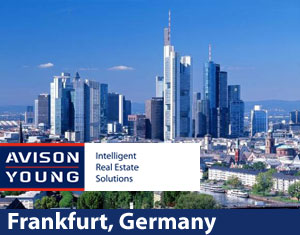 The Toronto-based company tapped German national Udo Stoeckl to take on the role of managing director and principal of the Frankfurt location.

The latest office opening marks the company’s third location outside of North America and the latest step in an expansion strategy that has seen it grow from 11 offices and 300 employees to 62 offices and more than 1,700 employees in a little more than five years.

Avison Young adds Germany to its current operations in the U.K. and the expectation is the firm will concentrate on those two countries in the near term as they are currently the best-performing economies of Europe.

Rose touts countries such as France, Ireland and Spain as logical next steps. “We are not quite ready to go in until we feel comfortable that they have stabilized and started to grow.”

Even mighty Germany, which has been the engine that has driven the European Union since the financial crisis, has shown recent signs of sputtering. Rose, however, is confident it remains the key to the continent’s prosperity.

It’s as high on the U.K. as it is on Germany, based on Rose’s comments. “London specifically, but the U.K., is a very strong place that . . . you can take some comfort that even if it has some bumps and bruises, it is a major market with strength that can withstand any of the pressures.”

AY expects more deals to come. “I would expect that you will hear a few more announcements of major cities in Germany,” he said.

AY’s Frankfurt opening, a two-person operation for its initial phase, is fairly typical of its expansion strategy: open a small outpost and grow from there.

“If you have watched what we have done, this is the way that we opened up most of the offices. Down in the U.S., four years ago we had zero offices and zero people. Now there are 44 offices and 1,000 people, and most of those offices started with an individual we put in place as our flag and feet on the ground and then built around them by bringing in individuals, teams, and acquiring companies.”

The same holds true for Frankfurt and greater Germany. “U.K. we started with a small company, 20 people, this one we are starting with a few people but we are already working on again, individuals, teams and companies to purchase to grow that.”

Tucked into the Frankfurt announcement, AY pointed out that just a few weeks ago, it acquired Orlando, Fla.-based MCRE, LLC (dba Morrison Commercial Real Estate) and opened a new office in Orlando on Nov. 13.

Stoeckl, AY’s point man in Germany, is a known quantity to the company. He joined Avison Young in 2011 to advise European and North American capital-markets clients on their cross-border activities and will continue to serve clients on both continents with cross-border transactions.

The AY website states Stoeckl has worked on $450 million worth of real estate deals in North America and Europe. He represented AY in the April 2013 sale of 30 Crown Place in London, which represented its first investment transaction in Europe.

Frankfurt is the financial services centre at the heart of the Frankfurt Rhine-Main region where 5.52 million live. Approximately 365,000 companies and a workforce of 2.88 million produce an annual GDP of €200.5 billion. The region consists of an international mix of industries, from large industrial groups to small software developers, AY noted.

Germany is also a country Canadian real estate companies and investors have targeted for growth, a trend AY hopes to capitalize on, said Rose.