In the past few years, Vancouver has watched office growth take off in its suburban areas as companies look for cheaper leases, transit-oriented hubs, and ways to cut down on office workers’ commute times. 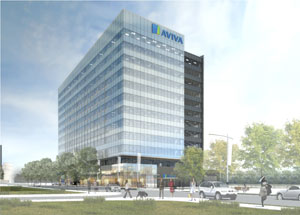 Now it appears the trend may be coming to Toronto.  Aviva Canada has announced it intends to relocate its head office to The Remington Group’s Downtown Markham development.

The company cited “superior amenities and the unique benefits provided by a multi-use development” as reasons for the move.

Aviva’s new offices will occupy the majority of a new 350,000-square-foot, 12 storey-building which will house more than 1,500 employees. The offices are scheduled to open in 2017.

Aviva is the second-largest general insurer in Canada and one of the largest businesses in the Aviva Group, which serves 34 million clients in 17 countries.

Greg Somerville, president and CEO of Aviva Canada, said in a statement the new urban centre will provide the company’s employees a place to work that is conveniently located to major highways and excellent transit.

“Additionally, the retail offerings, restaurants, art installations and green spaces will all contribute to a terrific environment and an engaged work force,” Somerville said.

Downtown Markham will have two million sq. ft. of retail, 72 acres of natural and landscaped green spaces and an art program, including “the world’s first power-producing, fine art carousel.”

According to the developer, “The Remington Group’s flagship project is an ambitious and exciting 243-acre, $4 billion development that will bring together luxury living, premium office space” and more.

Markham has already had great success in luring head offices to the region. Companies include Motorola, IBM, American Express, Honeywell, Toshiba and Honda.

Among the developers other projects is the Remington Centre which is currently under construction and when completed will be one of the largest covered shopping centres in Canada. It is going to be an 800,000 sq. ft. building located at Steeles Avenue and Kennedy Road also in Markham south of the downtown area.

The complex is to be built to a LEED standard, and will have one of Canada’s largest geo-thermal installations. It will include a 100,000-sq.-ft. “night market,” that will stay open until 3 a.m., as well as The Grand Residences, a two-tower condominium project.

The retail and entertainment components of the development include the 20,000-seat, NHL-sized GTA Centre, a $325-million arena; a 62,000-sq.-ft. Cineplex; and an “outdoor museum, which the developer says will come with its own audio tour.

The Grand Residences form part of the residential building that’s planned for the development. The Remington Group plan a mix of high-rise, low-rise, condos and townhouses for the area.

Some of the buildings include Nexus South, a 14-storey tower with retail on the ground floor and a sky bridge connecting to its twin, Nexus North; and the Benchmark luxury town manors, which feature three- and-four bedroom interiors.