Bay Street in Toronto has the most expensive office space in Canada, and no other city comes close to matching the $68.52 per square foot average rent that’s being asked for in the heart of the country’s financial district. 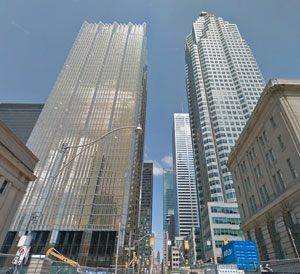 JLL Canada recently released its “Most Expensive Streets for Office Space” report, which ranks Canadian cities by their highest asking rents. It shows many companies are still willing to pay a premium for the most expensive spaces, and competition is growing to get into prominent financial, retail and government hubs.

“The most significant trend that we are seeing across major markets is that there are a large number of new developments underway,” said JLL Canada president Brett Miller. “Although we have only seen minor changes to the top market rents thus far in 2014, we anticipate that as the new inventory comes to market, overall rents will decrease in the older class-A stock whilst headline rents in new developments may raise the top line rents.”

Here are the most expensive streets in nine major Canadian cities:

Bay Street held strong in first place for the fourth year running. It features the headquarters of major Canadian banks and is home to many investment banks, accounting and law firms. Brookfield Place, at 161 Bay St., continues to command the highest office rents of any building in Canada at $76.54 per square foot. The average market rent in Toronto is $34.82 per square foot. (Bay St. looking north from Front St. shown in the image,)

8th Avenue SW again has the highest average gross office rents in Calgary. Large vacancies and availabilities along this corridor typically account for significant activity and command market-leading rates. Large oil and gas companies have historically clustered around the central business district in this area. The top rent on the street is $64.40 per square foot and the average market rent in Calgary is $46 per square foot.

Burrard Street has dropped to third place despite a slight increase in average asking rent from $58.47 in 2013. Approximately 18.3 per cent of downtown class-A office supply is located on Burrard Street between West Georgia Street and Canada Place.

The vacancy rate in these six buildings sits at 1.6 per cent, which justifies this location commanding some of the highest rental rates in the city despite the impending influx of new supply that’s putting downward pressure on rents throughout the central business district.

There seems to be a wait-and-see approach in anticipation of the 2015 federal election regarding the government’s intentions to lease or return more space to the market. The top rent on the street is $53.54 per square foot and the average market rent in Ottawa is $30.90 per square foot.

The average asking rent dropped from $48.19 per square foot, but 101st Street NW is expected to remain the most expensive in Edmonton with the recent commitment to build the arena district, a large-scale, mixed-use project incorporating the city’s new National Hockey League arena. This is expected to revitalize some of the most important corners on the street. The top rent on the street is $54.15 per square foot and the average market rent in Edmonton is $28.30 per square foot.

The average gross rent on the street hasn’t changed significantly year over year, but the total value of tenant inducement packages has nearly doubled. The most expensive building on the street (1250 René-Lévesque W) rents for $52.76 per square foot but has seen some downward pressure of two to four dollars on its net rent due to 170,000 square feet of vacant space left behind by Heenan Blaikie. The average market rent in Montreal is $30.38 per square foot.

Upper Water Street has maintained seventh place despite its average asking rent dropping from $36.65 per square foot last year. New construction coming on stream is expected to put downward pressure on rents in existing office buildings. The top rent on the street is $36.62 per square foot and the average market rent in Halifax is $27.44 per square foot.

Portage Avenue held strong in eighth place, with its average rent increasing from $35.17 per square foot. The class-A market remains tight and is expected to remain so through 2015. The top rent on the street is $37.32 per square foot and the average market rent in Winnipeg is $23.62 per square foot.