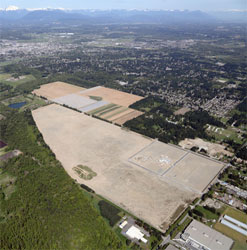 The partnership will see SCDC and BDG develop a “state-of-the-art, first-class” 114,000-square-foot custom-built facility for R. Wales Canada, a business unit of Weir Canada that provides engineering services and manufactures processing equipment for the resource sector.

The new facility for Weir Canada will be on 5.83 acres of serviced industrial land and include an additional 30,000 square feet for future expansion.

The City of Surrey in 2007 established SCDC to oversee development of city-owned properties and acquire sites for future development to facilitate economic activity, generate jobs and maximize the value of its real estate for the city. SCDC closed its purchase of the first parcel of Campbell Heights North lands, site of the new Weir location, from the province in February 2010.

Campbell Heights North was developed in phases. The first two sold out and the third, which includes Weir’s new facility, is about half-sold.

“We’re developing this out as the land developer, so we’ve rezoned it and put in all the roads and services,” said Doug Avis, SCDC vice-president of development and investment. “We’re selling lots mostly to users and some developers and, in this instance, we found a way to co-operate with the Beedie group.

“It has fulfilled two needs for us. It helped move the land along and we’re also trying to build a portfolio. We prefer to do it on the development side of things rather than to buy existing income properties.

“The quality of the soil is fantastic,” Avis added. “It’s an old gravel pit so there’s no pre-loading required. You can just scrape and build, which is very unusual in Vancouver.”

Colliers International is the broker for the land and is asking $940,000 per acre for it on SCDC’s behalf. Avis said SCDC paid “a lot less” for it and, although it has invested a lot of money in developing it, “we’re still doing fine and we’re making a decent return.”

This marks the first time BDG, Western Canada’s largest private industrial landlord, has built on industrial land owned by SCDC. BDG also owns 50 acres of development land in a nearby 1,900-acre site owned by the Province of British Columbia that’s being sold off in parcels. The provincial land has a similar name – the Campbell Heights Business Park – to the Surrey industrial park but is separate.

“We’re putting up some speculative development,” Todd Yuen, president of BDG’s industrial division, said of the 50 acres. “We’re talking to some groups for some build-to-suit, but there are no names that I can put forward yet.”

Metro Vancouver is particularly short of available industrial land and the Campbell Heights area has quickly become one of the region’s most attractive industrial hubs due to its central location and transportation connectivity. Notable tenants include Loblaw Companies Ltd., OK Tire and Advanced Wire Products.

“The manufacturing sector is the bread and butter of the industrial sector,” said Yuen. “These large warehouses that we build are wonderful and great for the economy, but they’re not always high employment centres.

“You just don’t see groups like Weir show up very often. Their moves are extremely expensive outside of the cost of the real estate and bricks and mortar. Their investment in the buildings themselves is absolutely massive.”

The City of Surrey industrial property is a five-minute drive from an American border crossing via Highway 15 and 15 minutes to the Trans Canada Highway. Highway 99 provides direct access to Vancouver International Airport and downtown Vancouver. The South Fraser Perimeter Road connects to a deep water port that can accommodate Panamax deep-sea vessels and provide a gateway to Asia Pacific markets.

“We searched a number of locations and facilities across Metro Vancouver and determined Campbell Heights North is best-suited for the company’s needs,” said Michael Carrigan, president of Weir Canada, which employs 1,400 people across Canada.

Weir Canada’s 20-year commitment to the location helps fulfill SCDC’s mandate to stimulate economic development in Surrey and attract high-paying, skilled jobs to the city — which has the lowest municipal business tax rates in the region.

“Weir’s selection of Campbell Heights North is a clear testament to the many benefits of this location in terms of access to a strong employee base and transportation networks,” said Avis. “With Beedie’s expertise in industrial development and construction, we’re able to offer Weir Canada a facility that will provide a solid foundation for growth well into the future.”

Avis said about 1,000 people a month are moving to Surrey, which has a population of about 510,000, making it the fastest growing of Metro Vancouver’s 21 municipalities. The population is projected to exceed 800,000 in 30 years.

In addition to the Campbell Heights North project, SCDC is leading development planning for the new city hall and public plaza in Surrey’s city centre.

Other active projects include: the redevelopment of Cloverdale Mall; a student residence in the city centre; residential projects in Clayton and Semiahmoo; an industrial build-to-suit project in the Bridgeview area; and a potential mixed-use development in Newton.