Scheduling an interview with Avi Behar, chief executive and broker of Behar Group Realty Group, can be a bit challenging. 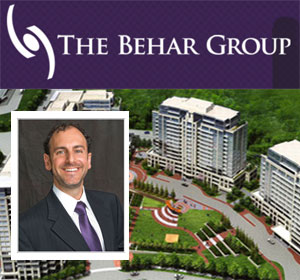 The second-generation head of the family-run business (father Yosi is still active as president) has an busy travel schedule that goes beyond real estate. The trendy term for his lifestyle might be “balanced.”

It might be better to let the younger Behar explain: “I really try to live my life as one whole. So that involves everything that I enjoy doing.  For commercial real estate,  I was just recently down in Las Vegas for the ICSC shopping centre convention.

“And it involves seeing the world, learning other cultures, studying retail, photography, a lot of hiking and walking.”

The blending of the professional and personal makes for a challenging “business or pleasure” answer at customs, he noted.

“I’m always inclined to check all the boxes, but I don’t. Whether I go to New York or Paris or L.A. (or studying mixed-use development in Tokyo), I try to always meet with new people including architects and developers and people in the finance industry and really get a sense for the landscape in those regions, but also talk about potential opportunity here.

“How we can bring some new vision, some new design and architecture to Toronto and to Canada?”

Not your father’s brokerage?

Behar’s eclectic take on the real estate business and life in general is mirrored by the services offered by the Behar Group.

The Toronto-based company’s “core business” remains its real estate brokerage, but it is much more than that, explained Behar.

“I see our office as really a business office where commercial real estate brokerage is our core business, but we get involved in all types of businesses, some technology start-ups, advisory, equity, etc.,” he said.

One of Behar’s major clients is Liberty Development Corporation. The brokerage sold Liberty a number of developments, including the mammoth World on Yonge development at Yonge and Steeles “which I believe is one of the largest developments in Canada square footage-wise, it is close to two million square feet.”

The project is not without its problems Behar noted when speaking at the Canadian Apartment Symposium Series.

“I had mentioned that particular development as working really well for the developer, but obviously now it is still partially vacant with all of the commercial condo units that had been sold to investors but not all of those investors have been able to tenant those spaces.”

Behar Group also brokered the deal for the land where Liberty Development built Metropolis at Metro Place.  At the corner of Sheppard and the Allen Expressway across from Downsview Park, it is a million-square-foot-plus development at the top of the city.

“It was just 3 1/2, four acres of grass when we sold it to them but it is now transformed four towers across from Downsview (Subway) Station.”

Behar Group has morphed from a one-person brokerage father Yosi ran out his house to a two- or three-person company (counting) Avi’s mom in the early days, to a 27-person brokerage since the younger Behar got his start in the business 25 years ago.

“It has transformed in a variety of ways. The market has obviously had its ups and downs, but in general in my 20-year career it has been a straight incline,” he said. “Size-wise, there has been numerous changes that we have needed to continually make as we have grown from a very small business to a medium-sized business.”

Despite its growth, the brokerage has tried to retain its “boutique” feel and family-owned and -operated culture. “I think we have retained that even as we have grown in numbers.”

That family approach is extended to clients, which the younger Behar said has led to a steady influx of referrals. “We treat every project as though we own it. We govern our advice and our guidance on that basis – if we owned that project, what would we do with it?”

On the hunt for new retail clients

The globetrotting Behar is always on the hunt for new retail clients to introduce to Canada. “From a retail point of view, we are travelling, we are working with global retailers, trying to bring them into the country.”

One such group Behar actively works with is 3 Brewers, which operates restaurant breweries in Quebec as well as Ottawa and Toronto.

The company is also working on an expansion with Dave & Buster’s. The arcade game and sports-based restaurant chain has 75 locations in the U.S. and one in Vaughan, Ont.

“So needless to say, there is a lot of room for growth and obviously a concept that works well for children and adults, so we are working on a rollout initiative with them.”

It’s safe to say that as long as Avi Behar is working, he and his firm will continue to learn and innovate.

“Just in general, we are working to get new ideas . . . whether it is from retailers or architects or designers or mortgage professionals or developers from around the world. So wherever I go, I really try to meet people and absorb, learn about other cultures.

“We have a lot to learn here,” he said in reference to Tokyo’s version of the below- and above-grade mixed-used PATH system.