There’s not much to the skyline of Little Italy in Ottawa, a trendy enclave just southwest of the city’s downtown core. But that’s about to change. 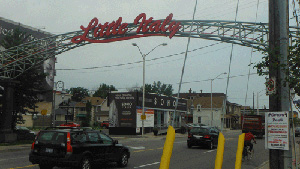 In a city where only three buildings currently top 30 storeys, according to a list compiled by Emporis, no fewer than four condominium buildings ranging between 35 and 48 storeys are planned or proposed for this neighbourhood.

A few more buildings with that kind of height are anticipated, along with a handful of others closer to 20 floors.

The area is currently dominated by two- and three-story structures that line Preston Street, a main drag widely known across the city for its great restaurants, comedy clubs and nightlife. As the name suggests, many establishments specialize in Italian fare.

At the south entrance to the neighbourhood near scenic Dow’s Lake that connects to the Rideau Canal, sales offices for two projects — the 35-storey Soho Italia by Mastercraft Starwood and the 45-floor Claridge Icon — provide a taste of what’s to come as condo builders bet thousands will pay to live there.

“It’s a cool, hip place,” said Kevin Yemm, a planner with Richcraft Homes, which is hoping to get two 48-storey condo buildings approved for the area. “People like to go there. There’s lots of restaurants. It’s close to downtown. It’s going to be on transit, and that’s what we need.”

The area is adjacent to Ottawa’s only existing light-rail line, the north-south O-Train. This location is one stop away from the still-to-be-built Confederation Line, an east-west light-rail route that will be serving downtown via an underground tunnel.

Car access is also abundant. The city’s main freeway, Highway 417 or the Queensway, is nearby, as is Carling Avenue, one of the city’s main arterial roads.

John Smit, a planner with the City of Ottawa, said there are projects approved or under review that would add nearly 2,000 residential units in and around Little Italy.

“The Preston-Carling area is really evolving as one of the most significant re-urbanization areas in the city, really transforming it into a destination within the broader downtown context,” Smit said. “This is really seen as an area that will undergo a significant change and transformation over the course of the next 15 to 20 years.”

Yemm said the main buyers of such condos are expected to be young professionals and people downsizing from larger homes.

He added that Richcraft’s proposed buildings in Little Italy would be mixed-use, with some ground-level commercial operations and a still-to-be undetermined amount of office space.

Yemm said developers have been taking cues from city officials when planning such tall buildings.

“They’re just finding that maybe it’s time that Ottawa raise the bar a little bit and look at how to intensify and put density in certain hubs.”

But Smit, from the city, said the push for height comes from private developers who see a strong market demand for residences in this area, and this prompted city planners to develop a strategic direction recognizing the market realities within the city’s vision.

Kelvin Holmes, managing director for Colliers International in Ottawa, said developers are pushing for as much height as possible because it’s economical.

“You’re trying to squeeze as much value out of the land as you possibly can, because land prices are going up, up, up all the time,” he said. “I think that there’s only so much room to move condo prices up so you’ve got to build more condo units on the site to make it economically viable.”

Holmes agreed Little Italy is an area where it makes sense to place big condo buildings.

“It’s got good access to the Queensway. It’s got access to Dow’s Lake and all those amenities,” he said. “It’s an attractive environment to work, live and play in. So I can understand why it’s attracting a lot of condo development.”

Still, Holmes warned that with so many condos planned for Little Italy and elsewhere in Ottawa, market saturation could be close.

Yemm acknowledged the possibility but added that Richcraft remains confident in the current market demand.