U.S. apartment investors and lenders enjoy a level of transparency of data regarding household formation and future demand Canadians can only dream about for now. 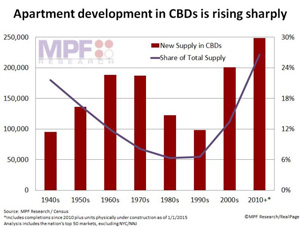 RealPage Inc., and a number of U.S. competitors, are working to outdo each other and further refine the data flow to allow investors and developers to build multi-residential buildings where the demand is and will be in future.

Jay Parsons, director of analytics and forecasts, MPF research at RealPage Inc., said rental rates are being set on a “daily basis” and that it is only a matter of time before similar big data reaches Canada. This transformation will occur as the multi-residential market matures and there are more sophisticated, foreign and institutional investors seeking in depth market reports.

Parsons’ U.S. charts indicate the areas of greatest growth for multi-family, the areas with the highest levels of household formation, are markets such as Texas and the Carolinas (Austin, San Antonio, Dallas, Charlotte, Raleigh-Durham and Nashville, Tenn.)

“And that is where most of the supply is going on a relative basis, but it is also where the households are being formed,” Parsons  told attendees of the Canadian Apartment Symposium Series in Toronto this week.

If those areas are hot, the lukewarm markets for apartments are the Midwest and northeastern U.S. where household formation is much slower.

“Suburbs have gotten a bad rap for years, in part because of what happened during the recession,” he said.

“But the mistake that a lot of people have made when they thought about suburbs is that they tend to think of suburbs in two different ways: as kind of a tired, burned-out suburban place full of a lot of bland chains and closed-down Pizza Huts and McDonald’s with the sprawling company parking lots or places like Phoenix and Las Vegas – they took 10,000 acres of desert and built 100,000 homes and a Walmart overnight.”

There are “good” suburbs, however – at least when it comes to real estate investing. Look for suburbs situated near economically strong metro areas – think the top half of U.S. markets in terms of job growth post-crash and rental rates, good transportation and other factors such as a steep jump in prices from renting to owning.

Good suburbs have enjoyed an acceleration in rental revenue and lower rental turnover.

“The main takeaway we have been really pitching to our clients when they think about going forward in the cycle with opportunities is don’t look at all suburbs as the same. There are good suburban areas with characteristics similar to the urban core and have a pricing premium.”

Part 1 of this article U.S. apartment market not like Canada’s provides further information about Jay Parsons, director of analytics and forecasts, MPF research at RealPage Inc. presentation at the Canadian Apartment Symposium Series in Toronto April 21, 2015.