Every year, BTB REIT (BTB.UN-T) aims to make $100 million worth of acquisitions and so far this year the Quebec-based trust has made just two deals totalling about $40 million.

With the  onset of fall mere days away, BTB’s president Michel Léonard remains confident he can reach the $100-million mark. “It is definitely more than one (acquisition),” said Léonard. 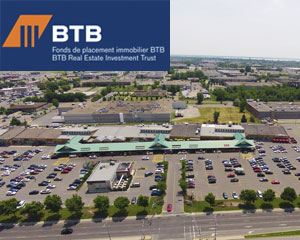 Although BTB set a goal last year of reaching $1 billion in assets over the next five years, it takes a patient approach, preferring to buy one property at a time rather than trying to snap up a collection of assets. “We rarely purchase a portfolio of assets because when there is a portfolio there usually is a premium. So we have handpicked certain properties more or less and for us it has proven to be a successful formula for us – for now.”

Getting to $1 billion doesn’t even require much of a ramp up from its historic growth pace, noted the REIT president, as BTB was at nearly $500 million in assets after its first five years of operation.

The REIT’s growth strategy requires plenty of travel and shoe leather for Léonard, a lawyer by training who was a founder of real estate services company Staubach Canada Inc. and later was a senior vice-president with Colliers International in Quebec.

“I look at a lot of properties and my batting average is certainly not 1000,” he said. “We have been very selective and very disciplined in that fashion.”

BTB’s largest acquisition so far this year came in May when it purchased a retail property in Saint-Jean-sur-Richelieu, Que. (1000 du Séminaire Boulevard North) for $31.6 million. That acquisition illustrates the REIT’s cautious approach: the 226,000-square-foot site, anchored by the likes of Pharmaprix (Shoppers), Maxi (Loblaws), Dollorama, and a Quebec government medical clinic, is 97% occupied.

“You have stellar national retailers that are occupying that building,” said the REIT president. “And we already had other buildings in the city of Saint-Jean. so it made sense for us just for scale and being able to reduce our cost of operating in that city.”

The REIT made its 71st acquisition last month when it acquired a 40,400-sq.-ft. industrial property in a Quebec City suburb for $7.9 million. The building is leased for 15 years to heavy machinery company Strongco Corp.

Currently, BTB has a diversified mix of properties, approximately 40% office, 30% office and 30% retail.

“I believed in diversification all along, and when I say that I don’t mean to say that others have it wrong,” said Léonard. “It is just that for an investor, a diversified platform is interesting because I think it brings security to the distribution.”

Currently about 80% of BTB’s holdings are in the province of Quebec with the remainder in the Ottawa region, which continues to be a focus for the REIT. “I’m definitely looking to beef it up.”

Léonard also has his eye on the GTA, but is not ready to commit to a market that carries a greater risk profile than the current cities it operates in.

“Given our size, it is not something that I want to risk right now but when we are bigger, it will be something that we may look at more aggressively.”

Ottawa, which he describes as “still very expensive,” remains a market where BTB can find ways to purchase properties that add to its earnings, unlike the GTA.

At its June annual meeting the REIT appointed two women to its board, Lucie Ducharme (executive vice-president of Groupe Petra) and Sylvie Lachance (executive vice-president of real estate development for Sobeys Inc.). “Both are very known and knowledgeable in real estate,” said Léonard. “They know what is good and what’s bad, so the (deal-making) discipline comes also from the talent that you have on the board.”

Last month, with the release of its second-quarter results, the REIT announced a five per cent increase in its distribution to 42 cents. “We were the first to increase our distributions and I think that was an important signal that we sent to the market because we wanted to show the market that we were very confident in our future distribution.”