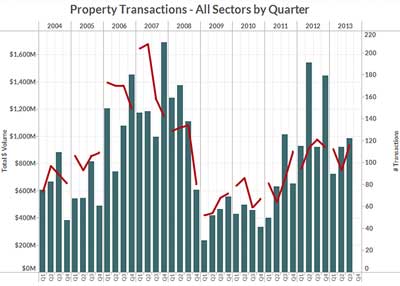 “I was really curious to see these numbers because they were right on the heels of the flood and to see what if anything we could tie back to that,” said Paul Richter, director of research with RealNet. “It is really hard to say (what caused the spike in activity).”

Land deals dominated third-quarter activity for Calgary as investment grew by 17% overall and activity levels improved by 70 per cent from the prior quarter, RealNet found. (Realnet Canada graph shown in image).

Sales data shows that land deals were primarily on the residential side.

RealNet defines medium density as multi-residential projects of four stories and under and high density as five stories or greater.

“The big surprise was the rush to residential land markets,” he said. “There was a real rush to acquiring land.”

He added that “deal velocity in the land market appears to be ramping up and may play a key roll in overall market measurements going forward.”

In the quarter, the office market accounted for four of the top 10 transactions for $242 million, or 25% of the market whole. It was dominated by the $180-million sale of Shell Centre to Cadillac Fairview.

“It really was the office market driving things,” Richter observed.

Big deals dominated Calgary’s CRE deal activity. The top 10 transactions in the quarter, which included sales in the hotel, office, industrial and ICI land markets, accounted for 63% of the total investment in the July-to-September period.

“It has been on the back of the very strong office market and the suburban markets in the office sector improving and the industrial markets have always seemed to be the strongest markets,” he added. “The institutional investors, which are typically the ones buying these assets are seeing the value in more than just the office product.”

The hotel market saw two transactions in the quarter for $196.6 million, dominated by one massive sale.

The sale of the Westin Calgary, part of a portfolio of hotels that included Westins in Edmonton, Vancouver and Toronto, sold for $183.1 million, making it the top transaction in the quarter.