A partnership between Blackstone and Ivanhoé Cambridge has acquired 11,241 apartment units in New York City’s Stuyvesant Town-Peter Cooper Village (STPCV) from CWCapital for a reported US$5.3 billion. 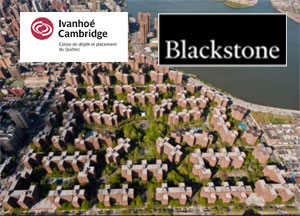 Up to 30,000 people live in STPCV’s 55 buildings, and the agreement represents the largest number of affordable apartments ever preserved in a city-led single transaction, according to a statement issued by the mayor’s office in New York.

Affordability extended by the agreement

About half of the units in the village, one of the largest enclaves of moderate- and middle-income housing remaining in Manhattan, have seen their rents increase to a market rate, fetching as much as $10,000 per month.

There are 5,000 apartments with rents below market value that are going to be lost to deregulation when tenants leave. The remainder of the units in the complex are rent-stabilized due to litigation and were scheduled to lose all price protections in 2020.

Under the agreement, Blackstone (BX-N) and Ivanhoé Cambridge’s Blackstone Property Partners real estate fund will ensure that about half of the apartments will remain affordable to moderate- and middle-income families for at least 20 years. The plan will halt the loss of more than 300 affordable apartments each year, according to the mayor’s office’s statement.

The New York City Housing Development Corporation will fund a loan of up to $144 million to secure the affordability and protect STPCV’s legacy as a mixed-income community.

“We have been an important real estate investor in New York City for over 20 years,” Daniel Fournier, Ivanhoé Cambridge’s chairman and chief executive officer, said in a media release. “Today, we have more capital at work in New York than in any other city in the world.

“We are delighted to invest in this exceptional property in partnership with Blackstone and, together with them, we look forward to building sustainable long-term relations with the community and our tenants.”

“This agreement provides an end to several years of uncertainty regarding the property,” Ivanhoé Cambridge public affairs and media relations vice-president Sébastien Théberge said in an email.

“It maintains a significant share of affordable housing for an extended period and provides predictability for the investors going forward.”

Blackstone and Ivanhoé Cambridge intend to protect the community’s open spaces and the unified nature of STPCV, as well as to create a welcoming environment to long-term tenants seeking to put down roots. The agreement will also provide additional on-site services for STPCV’s growing senior population.

The agreement will apply to Blackstone, Ivanhoé Cambridge and any future owner. The transaction is expected to close by the end of December, and the two companies will assume ownership and management of STPCV at that time.

Montreal-based Ivanhoé Cambridge, the real estate subsidiary of the Caisse de dépôt et placement du Québec pension fund, has direct or indirect interests in more than 160 million square feet of office, retail and logistics properties as well as in more than 23,000 multi-residential units. It held more than $48 billion in total assets as of June 30.

Blackstone, headquartered in Bethesda, Md., is a global investment firm with $93 billion of real estate assets under management in the United States, Europe, Asia and Latin America.