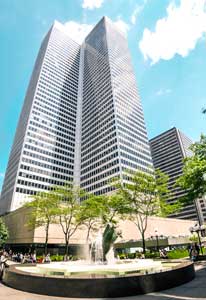 Blakes’ move to occupy the 30th and part of the 31st floors of the iconic building under a long-term lease at 1 Place Ville Marie is the second major relocation to be announced for the complex owned by Ivanhoé Cambridge this year.

“Interest is strong and the market is seeing that we’re investing in the property,” says Sébastien Théberge, Ivanhoé Cambridge’s vice-president of public affairs and media relations. “They’re also seeing that after 52 years Place Ville Marie remains the most prestigious and centralized location address in downtown Montreal.”

Blakes’ Montreal office is currently located in suite 2200 at 600 de Maisonneuve Blvd. W., and its move is consistent with the growth the company has experienced in “la belle province.”

“Over the past 14 years, Blakes has grown from being a new player in the legal market to a top-of- mind firm in the province of Quebec,” says Montreal managing partner Robert Torralbo. “All of us at Blakes are looking forward to this move with a great deal of enthusiasm.”

Ivanhoé Cambridge, a real estate subsidiary of the Caisse de dépôt et placement du Québec, has assets held through multiple subsidiaries located mainly in Canada, the United States, Europe, Brazil and Asia that were valued at more than $40 billion at the end of last year. Its portfolio consists mainly of shopping centres, offices and multi-residential properties.

Place Ville Marie is in the midst of a $100-million modernization program to make significant upgrades that Ivanhoe Cambridge anticipates should soon result in it receiving a LEED Silver certification. In addition to the dramatic views of downtown the building offers, the improvements will offer tenants more flexibility with regards to office design and technology.

“It’s leading the pack in terms of properties in downtown Montreal for meeting the level of expectations for customers and clients in 2014,” says Théberge. “When you look at the other properties downtown, not everybody has been investing that much. It’s been one of our company’s priorities to maintain its leadership position.”

“With our planned program for the (Fairmont) Queen Elizabeth and our retail destinations, we’re going to reinforce even more of the urban experience downtown — whether it’s for users, employers, employees or tourists — because of how these properties interact with each other,” says Théberge.

No specific details have been released, but Ivanhoé Cambridge plans to make major renovations to the Fairmont Queen Elizabeth, the province’s largest hotel, and its Sainte-Catherine Street retail properties.

Théberge says the restoration of the Queen Elizabeth will likely be of the same magnitude as the $75-million upgrade of Quebec City’s historic Fairmont Le Château Frontenac, which was completed in June.