The Building Owners and Managers Association (BOMA) of Canada honoured the winners of its 2014 national awards on Sept. 11 as part of BOMEX 2014 at Winnipeg’s Fort Garry Hotel. 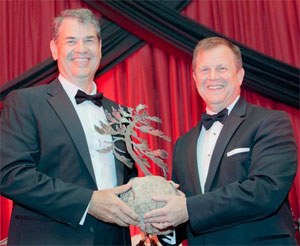 The Outstanding Building of the Year (TOBY) Awards are the most prestigious and comprehensive program of their kind in the commercial real estate industry. All facets of a building’s operations are thoroughly evaluated during the competition and winners are recognized in specific categories of building size or type.

BOMA Canada member services manager Debbie Prince recruits 18 judges for the national competition, and a minimum of three judges independently review each building by using a point system and adding comments through an online portal. BOMA International tabulates the scores and sends them to BOMA Canada to determine the winners.

“We always have a lot of interest in our awards program, and it starts at the local level,” says Prince. “Not every local region does its awards annually, so some of the locals will sit out a year and just do it every other year. So we average 30 to 45 national entries annually.”

TOBY Award judging is based on building standards, community impact, tenant relations, energy conservation, environmental, regulatory and sustainability practices, emergency preparedness and security standards, and the training of building personnel. All entrants must be BOMA BESt-certified.

The TOBY winners were:

The Earth Awards are BOMA Canada’s recognition of excellence in resource preservation and environmentally sound commercial building management. They’re presented to buildings that have made significant efforts to address environmental issues faced by both older and newer buildings. All entrants must be BOMA BESt-certified.

The Earth Award winners were:

BOMA Canada’s Pinnacle Awards recognize organizations and industry service providers that represent a standard of excellence to which all BOMA members and their employees should aspire. Innovation, teamwork, outstanding service and commitment to clients are taken into consideration when choosing recipients.

The Pinnacle Award winners were:

Servicemaster of Calgary from Calgary

Keith Major, senior vice-president of property management for Bentall Kennedy (Canada) LP, received BOMA Canada’s Chairman’s Award. This honour is bestowed for longstanding leadership and outstanding commitment to the success of BOMA in Canada and the commercial real estate industry.

“When I decided to be more engaged with BOMA International three years ago by running for nomination to the executive committee, it never crossed my mind I would be receiving the Chairman’s Award at the BOMEX awards gala in Winnipeg,” says Major.

“As the lone Canadian on the executive committee, it just seemed natural to help facilitate discussions between BOMA Canada and the 14 locals in Canada seeking both common ground as well as complementary offerings to make BOMA a stronger organization serving real estate professionals and owners.”

“We’re putting up our best, but the competition is really, really, really fierce.” says BOMA Canada president and chief executive officer Benjamin L. Shinewald. “These are the best-managed buildings in the entire world.

“We’re confident that Canadian-managed buildings are as good as any in the whole wide world and we truly believe that we can win every single category. But it’s not like Canada playing Israel for the gold-medal hockey game. This is like Canada playing Russia.”