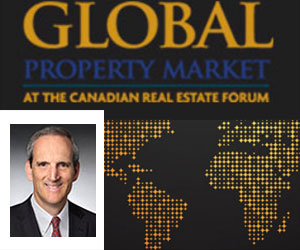 LaSalle’s global investment strategist’s pronouncements come at a time when Canadians are buying foreign real estate at an unprecedented pace.

In the past year, Canadian institutional investment in foreign property markets exceeded the amount of capital spent domestically for the first, Simon Fairchild,  the executive director of IPD Canada, said at the conference.

Canadians have become the second most active investors in real estate beyond their national borders – behind only the U.S. and ahead of many larger countries and well-heeled sovereign wealth funds.

The underlying economic factors that are driving high returns from global real estate markets are the result of what Gordon referred to as the three lows.

“Low interest rates, low inflation, low GDP growth … one would think that would result in low returns for real estate but that is not the case at all,” said Gordon.

“The three lows combine to produce double-digit returns in an asset class that legitimately should be four per cent to five per cent over a 20- to 25-year period, ” he said.

The world’s “bizarre apparition” of “low, low, low and high (returns)” is anchored in real estate, Gordon said.   “A risk-free rate”’ of investment has been assigned to real estate by investors and as a consequence huge amounts of money has flooded into the property market.  The massive capital flows into real estate has in turn indirectly propped up every other asset classes.

With reference to traditional economic theorists, he said normally when there is high capital availability it flows into many asset classes and toward such things as improving productivity and providing equity to new business.

In his presentation, Gordon detailed how various economic factors have produced low interest rates, low inflation and low GDP and collectively contributed to this phenomena. He described it as being contrary to traditional economic theory and that new explanations for how the economy is behaving are just emerging.

“Many of the economic theories of the past don’t apply to the present phenomena.  Textbooks say we should have higher inflation but we don’t.” he said.  Deflation concerns, commodity price decline and central bank policy such as quantitative easing (QE) in the U.S. are all symptoms of this unprecedented occurrence he mentioned.

Martin Wolf’s book ‘The Shifts and the Shocks’ is recommended reading for those seeking to understand the new economy, said Gordon, who made several references to its influence in his thinking about boom and bust cycles.

In 2015 and possibly for an additional year or two, Gordon expects property will continue to have lower yields, higher prices and that “the magnetic attraction of capital to real estate” will continue.  He predicted a 14% return in 2015 , 18% in the U.S. and U.K.

While one might consider this to be good news Gordon had a powerful cautionary message: “My instinct is that cheap and abundant capital is not good for a capital intensive asset class like real estate and it will lead to a boom and bust.”

Other predictions from Gordon

The growth in the securitization of niche real estate markets such as student housing, self–storage and private home rental was another trend highlighted in Gordon’s presentation.

Migration of people between cities is poorly understood and difficult to measure, yet it is having an impact on real estate in markets around the world, he said.  He praised Canadians for having one of the best records globally for welcoming immigrants and integrating them into our economy in a positive way.

Leadership in the property sector that has been dominated by white males is expected to change as the millennial who Gordon described as more gender and ethnically diverse begin to fill management roles.  He also foresees emerging market real estate executives taking a different approach from people currently employed in the industry.

Gordon provided the following five global predictions for 2015 in his closing remarks at the conference:

– Homes in major global cities will sell for over $100 million;

– Mansion taxes will be imposed in London and New York;

– The market capitalization for an individual REIT will reach $75 billion;

– “The curse of the tall buildings” will beset China and Saudi Arabia. The curse refers to the collapse in real estate markets that has occurred in the past when there is an attempt to construct the world’s tallest building.