Boulevard Industrial REIT aims to be a consolidator 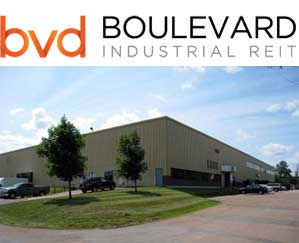 “The business plan is to be the institutional consolidator of industrial properties in primary and secondary markets across Canada,” he said.

That game plan, however, does not sound dissimilar to every other real estate outfit with a focus on industrial. Doesn’t everyone want to be a consolidator?

Not at the small end, apparently.

“It occurred to us that there are fewer people that are consolidating these one-off assets, these $6-million, $8-million and $12-million one-off buildings of which there are thousands across Canada,” he said. “We look at the fundamentals around the real estate, good tenants, well-located, the price per square foot is an important metric, we are buying these assets for below replacement cost, we like that.”

Hayes, an industrial real estate veteran (he was previously CEO and president of Dundee Industrial REIT and Pure Industrial REIT prior to that), sees a sector with an extremely diverse ownership base that makes it a buyer’s market.

“There are a lot of different owners of industrial. It ranges from pension funds to lifecos to other REITs, high-net worth families, a lot of owner-occupied space, some private deals,” Hayes said.

Clearly, that huge host of owners have different priorities and agendas and some are willing sellers regardless of where the market is in the cycle.

“A bunch of different people own the asset class, which is good,” he said, “and a lot of it is in the hands of one-off individuals or companies and the properties might be valued at $5 million or $6 million.”

The REIT’s roots date back to last July, when the venture started out as capital pool company HHT Investments, with the initials standing for the three principals. Besides Hayes,  there is Mark Hogan (a director and former vice-president, business development and general counsel) and Heidi Tibben, (former vice-president of operations with Pure Industrial) who has the same role with the new REIT.

While Hayes acknowledges there is competition in the industrial sector, he is banking on Boulevard being able to prosper in the sub-$10-million niche where the big guys can’t (presumably) bother to tread.

“Despite the fact that there are competitors in the space, many of them are also looking for the larger, call it $20-million to $30-million or larger, deal, where the yields get a lot tighter. So we think that we can make some money in the smaller space . . . I think it is pretty safe to say that H&R (REIT) is not going to go and buy a $6-million industrial building.”

Hayes expects it can do between $60 million and $100 million worth of acquisitions across Canada over the next year.

“If I were to look out a couple of years to when our portfolio was much larger, I think it is going to mirror pretty closely the way industrial is laid out nationally.”

Of the 1.7 billion square feet of industrial property nationally, about half is situated in the GTA, so he expects that ratio to be similar in Boulevard’s future holdings.

“We do like the Maritimes, it is sort of our business strategy magnified, where there is much lower institutional competition there. Certainly, if you like Canada, you have to like Alberta. Winnipeg is a market we like and very, very selectively in the province of Quebec” with its political risk and generally older industrial stock.

“The vendor had recently spent a considerable amount of capital on the buildings, so that is not on our ticket, and we bought them at very, very attractive yields,” said Hayes. The deal also forced the REIT to go back to the market for more capital, which he said was not necessarily a bad thing.

Hayes has been spending plenty of time in front of would-be investors and has his pitch down pat for those who may not be too familiar with the ins and outs of industrial real estate.

A factor the REIT evaluates before doing a deal is market rents near the potential target. It carries out a third-party study of the rent of the prospective property as well as the surrounding area. For its qualifying transaction, it purchased the properties at a 14% discount to market rents, the REIT CEO noted.

Hayes is bullish about the industrial sector and the Canadian economy in general, which should be no surprise given he expects to buy $100 million worth of properties over the next year. What is different is he has a shop-floor view of the economy rather than a boardroom perspective.

“When we acquire properties, we go into a property tour and do tenant interviews. Generally tenants today are saying, ‘You see that $8-million machine over there? I have another one coming from Germany and I am running three shifts now and if the space next door became available, I would take it.’ So the fundamentals of these little businesses that occupy our properties are pretty good.”