The Dayhu Group of Companies‘ bid to buy up land in Delta, B.C., to build state-of-the-art distribution centres appears to be paying off.

Dayhu recently announced that Apps Transport Group has signed on the first tenant for its new Boundary Bay Industrial Park. 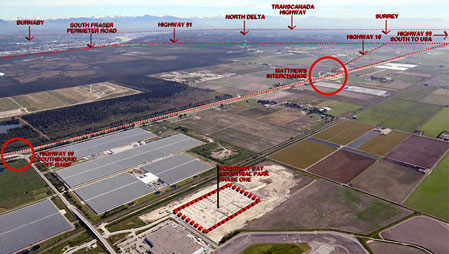 Apps is leasing 100,000 square feet, space it will utilize to provide warehousing, receiving and distribution for offshore goods and intra-B.C. and Alberta trucking.

Apps works with major Canadian retailers such as Canadian Tire and Toys “R” Us. “We needed proximity to the port,” Apps president Rob McDonald said in a statement.

“It was difficult for our trucks to get out of Richmond (the location of the company’s previous facility) or back in, but the new highway gives us more than one way to get into and out of Vancouver.”

Boundary Bay, to be completed by May 2014, is minutes away from Deltaport, which handles more than 70 per cent of the region’s inbound container shipment volume.

The facility is also easily accessed from the new South Fraser Perimeter Road, a four-lane expressway that will connect the port with Highway 1.

The Boundary Bay park will open the way for more large-scale retailers and their distributors to locate in Delta’s new industrial hub rather than in Alberta, which offers more large industrial space, according to Dayhu.

Tier One industrial land is in very tight supply in B.C.’s Lower Mainland. A Colliers International report earlier in the year noted several large distribution companies chose to locate in Calgary over Vancouver.

Earlier in the year, Paul Tilbury, COO of the Dayhu Group, told RENX.ca: “In real estate, it’s often good timing, good fortune, and where we had a few brokers in the marketplace who were looking for land for us and happened to come upon this piece at the right time.”

An article in the Globe and Mail earlier this month outlined some of the tensions simmering over property in the Lower Mainland. The article pointed out that companies such as Amazon.com and Costco are looking for large parcels of land near Deltaport and, as a result, realtors and brokers are arguing some of the agricultural land should become industrial.

However, the Globe said any moves to convert agricultural land to industrial will likely be met with opposition from Lower Mainland politicians. That puts Dayhu in a sweet spot as the owner of one of the few and likely the largest distribution centre with access to the major transportation hubs.

“We’re effectively the only option under construction that can offer contiguous space of this magnitude,” Tilbury said.

Dayhu is a privately managed and family owned business with more than 4.5 million sq. ft. of industrial, commercial and retail property across Canada.