In a market where the supply of large-scale light industrial lands appears to be shrinking, Vancouver-based developer Dayhu Group of Companies has snagged itself a prime piece of property. 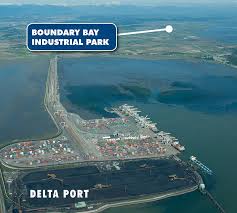 Nearby Deltaport is Metro Vancouver’s largest port, handling more than 70 per cent of the container traffic moving through the area. In December, the provincial government will open the South Fraser Perimeter Road, a four-lane expressway that will connect the port with Highway 1. Boundary Bay Industrial Park, as Dayhu’s new facility is called, sits right on the route.

Paul Tilbury, Dayhu’s chief operating officer, says there’s no question the land purchase is fortuitous. “In real estate, it’s often good timing, good fortune, and where we had a few brokers in the marketplace who were looking for land for us and happened to come upon this piece at the right time.

“We saw it as an opportunity that was right for our business and obviously looked to pursue it.”

An unique feature of Dayhu’s distribution facilities are 36-foot ceilings, allowing for significantly more storage. Most similar structures have ceiling heights of 28 to 32 feet. The new ceiling heights allow Dayhu a smaller building footprint and to build up rather than out, increasing storage capacity at a time when light industrial storage space is limited.

The facility isn’t designed as a general container storage facility. Rather, the Boundary Bay Industrial Park is meant to act as a distribution facility for big box retailers such as Home Depot and Walmart.

Bulk containers from the port and destined for retail clients would arrive at the facility for storage before heading out to their retail destinations.

It’s a business model that has served the privately held, family-owned business well. With completion of the Boundary Bay project, Dayhu will operate roughly four-and-a-half million square feet of industrial and commercial property in B.C. and Alberta.

Currently, the company operates distribution facilities for Walmart, Best Buy and the Pattison Group, among others. “We try to target tier one, Fortune 500-type distribution companies,” Tilbury says.

Tilbury says they have yet to sign any contracts for distribution for the $90-million Boundary Bay distribution centre. However, Dayhu has started a marketing campaign and is optimistic they’ll have the building at least partially leased, if not full, before completion of its construction in May.

“Tier one industrial distribution space in the Vancouver market is very difficult to find,” Tilbury says. “A lot of it is governed by the lack of industrial lands in the Lower Mainland.”

Colliers International’s Metro Vancouver Industrial Market Report for the second quarter of 2013 backs up Tilbury’s statement. That document cites an industrial lands report from The National Association of Industrial and Office Properties and Pacific Land Group that identifies a shortage of space in Metro Vancouver.

The report says 15-to-30-acre sites are in short supply for larger manufacturers and distribution centres, while sites larger than 30 acres for international logistic companies are also lacking.

According to the report, the fact that several large distribution companies recently chose to locate in Calgary over Vancouver is a sign municipal policy makers need to “investigate the merits of brownfield redevelopment, releasing Agricultural Land Reserve Lots, intensifying land use, assembling parcels, or ensuring government-owned lots do not constrain future development.”

Tilbury notes that while the market is always competitive, Dayhu facility’s high ceilings make it unlike anything else available in the marketplace.

Dayhu has come a long way since Ben Dayson founded the company in 1956. An immigrant to Vancouver, Dayson bought the Western 5 & 10 Cent Store, and then built his first apartment building in Vancouver’s West End in 1951.

Today, the company’s president and CEO is Jonathan Barnett, the third generation of the Dayson family to run the firm.