The concept of Montreal-based Breather’s app-based offering is so simple it’s a wonder no one had thought of it previously: use your smartphone to locate and reserve office space for 30 minutes, a few hours or an entire day. 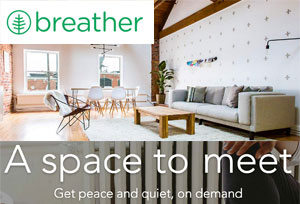 Breather is the brainchild of Julien Smith, who credits a successful career phase as an author for the inspiration.

“I was writing business books and when you write business books, if they excel at all, people ask you to speak at conferences,” he explained. That resulted in him spending a great deal of time in unfamiliar cities, looking for a quiet place to hunker down and work.

“That would result in me ending up in Starbucks a lot because that is the only place to go in a city that you don’t know very well.”

To this day, the Breather founder believes he competes more with the ubiquitous coffee chain than with hotels or office centres.

“I really think I compete with a public park or Starbucks, something like that. The thing with business centres is they are really ugly or really expensive. Hotel meeting rooms, for example, are mostly booked by bankers  or executives who want to have it for a whole day or whole week maybe and have it catered.

“We just offer a lower-priced, but still really good quality minimalist version of that.”

Prices typically range from $15 to $40 an hour, Breather states on its website.

Smith got to thinking about the relatively high value of office real estate and how finding lower-priced office space could be transformed by software and more specifically apps that run on increasingly smart smartphones. “The result is Breather. Get exactly what you want when you want it, make it really useful to you and to other people and have it be affordable and really self-serve to use without a secretary being there or anything like that.”

What’s on offer currently from Breather is spaces ranging from 134 square feet up to 1,000 sq. ft. (most are 300-400 sq. ft.) that contain the basic necessities of office life: Wifi, pencils, pens, notepads and candy. Some spaces include dry erase walls for sales meetings or brainstorming sessions.

Breather doesn’t own the space, but ensures it has the right touches. “We don’t necessarily furnish it, but we always are involved from a design perspective. The reality is that most people that own space are not very good at making it nice and ugly space doesn’t sell.

“Basically, we turn a space from zero dollars an hour to $35, or whatever the number is, by making sure that we curate the space properly.”

Using a smartphone, a Breather customer can find available office space nearby and enter via a unique PIN code that only works during the duration of the booking. Rooms are cleaned after every stay.

Breather got its start in its home base of Montreal but has since branched out into Ottawa, New York, San Francisco and, this week, into Boston. Plans are to expand into Toronto and Vancouver and other U.S. cities such as Washington and Chicago.

The company is currently nearing 100 locations.

It has taken some detective work on the part of Breather’s team to figure out just who is using its spaces. A quick answer is it’s a varied lot.

One particular user captured the company’s imagination, regularly booking six spaces at the exact same time in Manhattan. It turned out that it was a flower delivery service that used the offices as a way station for neighbourhood deliveries over a two-hour span.

“They could never do this otherwise because they can’t have a warehouse in every part of Manhattan. Really what they just need is a private place to do business for two hours and then they are done.”

The flexibility of the on-demand service is one of Breather’s most appealing attributes. The other is geographic reach. The more locations it has, the more useful it is for potential and current users, meaning that expanding its network of offices is the company’s most pressing goal.

Breather typically deals with property owners who may have difficult-to-rent office space. The math is immediately appealing to owners, Smith says, when they compare the rent a Breather space would pay them versus the square footage produced by a long-term lease.

“When they discover that they can sell their space directly and pretty much with no friction for like $30, it really transforms the economics of that space for them. We end up taking that space basically forever because once we take it and we are able to make them revenue, there is no reason that they would ever lease it to anyone else.”

The company needs to rent a room only “a few hours a day” to break even, Smith said.

“All our spaces are rented, pretty much packed, from nine-to-five.”

And real estate brokers’ commissions are safe, said the founder.

“Even if we were in every building in Toronto or Manhattan, we will still only be a 1,000 sq. ft. in that building. We would never own the entire building, so there is plenty of business left for everyone else.”