Canadian commercial real estate is in for a potentially rough ride in 2014 – and one of the most challenged sectors may be retail.

Avison Young, in its newly released 2014 Commercial Real Estate Forecast for Canada and the U.S. report, describes the country’s retail landscape as “competitive.” 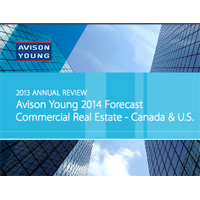 The report provided less of a look ahead as much as a summary of the year just past.

It noted that both domestic and foreign players (mostly from the United States) are fighting for hard assets and major retail brands even while consumer spending is softening amidst “exceedingly high” household debt levels.

In the report, Bill Argeropoulos, Avison Young’s vice-president and director of research for Canada, writes that bricks-and-mortar retailers are battling to stay relevant and competitive against their online competitors.

According to Argeropoulos, people increasingly look at products in stores but then purchase them online, which has forced retailers to adapt multiple channel strategies in order to retain their customers.

As chains such as Staples, Best Buy and Sears Canada slashed jobs and reduced footprints, they opened up prime retail space to competitors, many of them foreign – such as Nordstrom and Target.

However, Argeropoulos cautioned American retailers to heed the lessons Target learned – Canadians are less likely to buy across multiple categories in one store, while expecting the same low prices Americans enjoy.

The most cutthroat retailing competition, though, will likely take place in the supermarket sector, as other analysts have pointed out. Avison Young in particular noted the mergers and acquisitions last year with Loblaws buying Shoppers Drug Mart and Sobeys acquiring Canada Safeway.

“All of this activity is part of the retail industry’s effort to lower overall operating costs, increase purchasing power with manufacturers, and leverage more efficient distribution channels,” Argeropoulos writes.

But with Wal-Mart having aggressively moved into the grocery space, along with the aforementioned mergers and acquisitions, it appears a full-fledged price war is breaking out. And as the Globe and Mail reported in early January, it’s led to Sobeys demanding price cuts and freezes from its vendors with Loblaws likely preparing to do the same.

On the positive side, big box retailers have been experimenting with small-format urban concepts, and the demand for complete communities has led to a rise in mixed-use projects incorporating street-level retail with parking and residences above.

And while e-commerce may lead to the downsizing or closure of more bricks-and-mortar stores, it could add up to good news for the industrial sector as additional space would be required for order fulfillment and merchandise returns.

“Tepid demand” in combination with up to  27 million square feet of new office space coming onstream over the next three years will push office vacancy rates up in 2014. The report anticipates that what has been a robust Canadian office market with single-digit vacancy rates will come under more pressure.  Rising shadow vacancy in Toronto and Calgary are expected to impact leasing in both cities.

Mark Rose, the chairman and CEO of Avison Young, said that in general tapering will occur during the first quarter of 2014, interest rates will rise further, and real estate debt will become more expensive.

“Yes, pricing is challenging and feels a little ‘toppy,’ but quality assets with great covenants are in demand and there is ample capital willing to acquire long-term holdings,” Rose writes.

Overall, the report said ongoing development is an encouraging sign the markets will remain strong, offering opportunities for occupiers, owners and investors.