An east-end suburb in Ottawa with plenty of people but not much employment is poised to get a little more balanced with development plans projected to bring about 2,100 jobs to the area.

Brigil, a developer based in Gatineau, Que., just across from Ottawa, recently announced plans to build a 450,000-square foot, mixed-use development called Petrie’s Landing III at a cost of about $300 million in the suburb of Orléans. The name of the development is derived from nearby Petrie Island on the Ottawa River. As well, the new development is meant to compliment Petrie’s Landings I and II, which are nearby condominium developments by Brigil still being built out.

“The land was already zoned for employment and I was trying to find a way to have maximum use out of the land over there,” said Martin Chénier, Brigil’s general manager for Ontario developments. “The whole idea started getting bigger and bigger, and that’s how we came about having this project.” 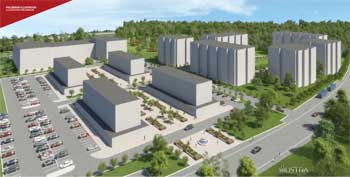 Adding office space where there isn’t much

Chénier said there was plenty of co-operation from city officials to get this development in this area and that employers who locate there will receive tax rebates from the city.

He added that Orléans has the lowest employment-to-residents ratio in the city. Data on the City of Ottawa’s website shows about 95,000 people lived there at the time of the 2006 census while just 18,000 people worked there. Chénier said more than 300,00 square feet of Petrie’s Landing III will be office space.

Kelvin Holmes, managing director of Colliers International in Ottawa, said it’s “very unique and very significant” for such a large-scale commercial development to be planned for Orléans. But he added that he doesn’t see much demand for office space in that part of the city.

“That is not a growing market,” he said. “The further east you get, the less demand there is for office space.  .  .  .  So unless he’s got the inside scoop on some significant tenant that he’s pre-leased it to, or he’s got the federal government interested in taking the space, I don’t understand the business plan for that type of development in that part of the city.”

Chénier said there are no signed deals yet for tenants, but there has been plenty of interest expressed in this site both before and after the official announcement on Sept 12.

“Some people were questioning, ‘Is there going to be something there?’ ” he said. “We’ve got a few people lined up, and we’ve definitely received a few phone calls since (the announcement).”

The federal government, as it moves out of older buildings, has indicated a willingness to locate more in areas beyond downtown Ottawa.

“We’d welcome the government there, that’s for sure,” Chénier said.

Chénier said he expects to have municipal approvals in place and work started by 2015, with the first phase of the project done by the end of that year. He said the rest of the project will be rolled out over a five-year period.

Nathan Smith, senior vice-president of Cushman & Wakefield Ottawa, said that Brigil’s plans will probably see some delays with efforts to pre-lease space not likely to be easy.

“I fully expect he will not build the magnitude of office space that’s proposed here unless he has some sort of lead tenant or tenant for all of it, which could happen soon, but more likely it will be well past 2015 (or) late 2015 that it gets in the ground, if in fact at all, given the tenancy,” Smith said. “Many developments are proposed and ready and organized to go, and then the next thing is to secure tenants.”

Smith said the federal government seems like a probable candidate to take space at Petrie’s Landing III, but he noted the current process of downsizing the public service and the fact there are several government buildings in the national capital area that were recently built or are in construction.

“There’s no requirement for new construction right now for the feds,” he said.

The first and main component of Petrie’s Landing III will be a structure housing a 65,000-square-foot banquet hall with the rest being office space in a six-storey base with two eight-storey wings. Later phases will include four six-storey buildings with ground-level retail, two floors of office space and condominium on the three top floors. Six other buildings will each be 10-storeys of condos. Chénier said the housing on this site will have room for about 800 residents.

Chénier said Brigil is likely to stay on as the property manager of Petrie’s Landing III. He would not say what kind of leasing rates would be offered for the commercial properties, only that it would reflect the market reality of suburbs being less expensive than downtown while still not being the “cheapest” around.

“We stand behind our product and the quality of our stuff,” he said. “Rarely are we the cheapest guy on the block because of the standards we put forward.”