For the past few years, Montreal-based Broccolini Construction has expanded beyond the business of just putting up buildings to become a vertically integrated real estate company involved in all aspects of the business, from land acquisition to development and design-build services. 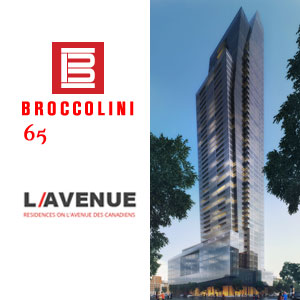 The family-owned company, now in its third generation, also looks to have outgrown its Montreal roots, having opened offices in Ottawa and Toronto in recent years.

The new outposts were not opened simply to chase new business, but to service an impressive array of current projects, explained Jean Langlois, Broccolini’s director of communications and marketing.

“Business is booming,” he said.

The company is currently working on speculative industrial developments in both Montreal and Toronto, building a 150,000-square-foot location for Saks Fifth Avenue – the first for Canada – and is working on the largest residential tower in downtown Montreal (L’Avenue shown in image).

The company has also been awarded another large Montreal retail development it is not yet able to divulge.

The 65-year-old company earned its reputation in the industrial sector and that remains a strength, Langlois said. “Industrial has always been and always will be something that we are good at and in demand for.”

The company resume includes building distribution centres for the likes of Canadian Tire, Sobeys and Target in Ontario and Quebec as well as manufacturing facilities for a host of clients.

One of its biggest current projects is its redevelopment of “Quartier Évolution,” a 50-acre business and mixed-use campus in Kirkland, Que., it purchased last year from Merck Canada.

On the residential side, its most ambitious project is the 50-storey, mixed-use residential development L’Avenue. Located across from the Bell Centre in Montreal’s core, it is slated to be the tallest residential tower in the city.

The building will stand out for more than just its height, the developer said. The tower will be composed of “three sculpted rectilinear volumes” while a podium will house office and commercial tenants.

Condo tower going up in Ottawa

The builder-developer is also busy in Ottawa where it is erecting The Slater, a 21-storey condo tower in the business district that will boast a mix from one bedrooms to penthouse suites.

“It seems that in some areas, the market is shifting a little bit towards apartments now after the condo craze,” said the Broccolini executive.

“We would love to start a residential tower in Toronto,” Langlois said. “We are actively looking for land in the GTA.

“We are really happy with the progress that we have been making in Toronto and how quickly we have been able to establish a presence and confidence in the market towards the Broccolini name.”

Michael Broccolini, a third-generation member of the family, is in charge of the Toronto office “networking and trying to buy as much land as he can,” in the city.

Broccolini was established in 1949 and over the years has built everything from homes to warehouses and office towers. Founder Donato Broccolini’s first project was a single-family home in Montreal.

In the 1980s, he brought sons John, Joseph and Paul into the business, which then expanded into retail and industrial construction.

Today, three generations and 300 employees work for the company, which has expanded into engineering, architecture, real estate and development.