There’s money in Texas – and it’s not all in oil. Toronto’s Brookfield Real Estate Opportunity Fund has put its nearly 200,000-square-foot class A office building Two Addison Circle on the block.

The LEED-certified Dallas building  is 89.4 per cent leased with a mix of local and national tenants, according to HFF LP, the commercial real estate company retained to sell the building. 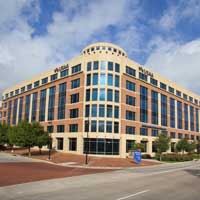 Two Addison Circle is located at the entrance of the 70-acre, mixed-use development, Addison Circle. In addition to two class AA buildings, the development includes 2,400 apartments and townhomes, and numerous restaurants and retail stores.

Brookfield purchased Two Addison Circle in 2010 for $16 million. At the time, the newly constructed building was vacant. However, the Dallas News reported that the lenders who sold the property after foreclosure had originally mortgaged nearly $40 million on the deal.

Today, the lead tenant in the building is USAA, the 58th-ranked company in terms of net worth among Fortune 500 companies and the fifth-largest homeowners’ insurer.

Brookfield is part of a trend in Dallas real estate investors who are now taking profits out of buildings they bought for far cheaper several years ago, reports The Dallas News.

Demand for the city’s property is high and Dallas itself has recovered from an economic downturn of a few years ago, which means any buildings for sale could go fairly quickly, the paper reported.

“Owners who made bargain buys during the economic downturn may now have the opportunity to book some big financial rewards,” writes Steve Brown, the paper’s real estate editor.

Certainly, Brookfield did just that in 2012 when it sold the Dallas-based Convergence Office Centre for $123 million. Brookfield had acquired the 950,000-sq.-ft., 10-building office/data centre situated on 185 acres for $54 million in 2006.

At the time of the sale, David Arthur, the fund’s president and managing partner, said, “The sale of Convergence represents the successful execution of our strategy of acquiring under-performing assets, prudently investing capital to upgrade the properties, and actively managing them to create value for our fund investors.”

In Houston, Brookfield’s properties include the 53-storey Heritage Plaza, the 35-storey Total Plaza, and Allen Center, a three-tower development with room to develop two more buildings.

Properties in the U.S., Canada and Australia

The Brookfield Property Group has more than $100 billion of real estate assets under management and interests in more than 340 million sq. ft. of commercial space globally.

The company’s property portfolio includes 173 retail assets, predominantly in the United States and Brazil; industrial assets of approximately 63 million sq. ft.  and 79-million sq. ft. available for development; and ownership of 65 per cent of Fairfield Residential, the 18th-largest apartment manager in the U.S.