Plaza Retail REIT (PLZ.UN-T), which flies under the radar of many REIT observers in part because of its Eastern Canada focus, has just come off what may be its busiest and most successful year. 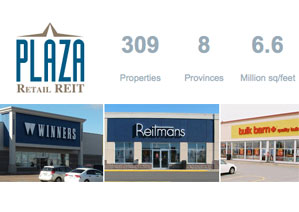 The Fredericton-based operator and developer of unenclosed and enclosed retail real estate kicked off 2014 with an announcement it had succeeded in its two-plus year quest to achieve REIT status, and seemed to gain momentum from that point.

“In ’14 we became a REIT at the beginning of the year, we really finished the consolidation of our KEYreit acquisition,” said Michael Zakuta, Plaza’s president and chief executive. “We had a very, very successful sales program of Key REIT assets that we did not want to own and we were able to make significant gains over our original underwriting value – very, very important gains . . . gains that we did not anticipate when we did the deal.”

Plaza has been busy since that time with the KEYreit assets: improving what can be improved and selling what doesn’t make sense for its portfolio. RBC Capital Markets, in its lengthy Q1 2015 report, noted Plaza has sold 15-20 per cent of the KEYreit portfolio for more than $50 million, or about 30% over the underwritten value of the properties.

The year just past was also a time to take advantage of the low interest rate environment. Plaza refinanced $170 million worth of debt, thereby freeing up cash for other uses. It also renegotiated rates on about half of KEYreit’s debt “which was not very well organized,” said the Plaza chief.

While the KEYreit acquisition has kept Plaza’s management team busy, acquisition is not its main focus. Development is. As of the end of September, the REIT had 19 properties under development, which will add 620,000 square feet to its portfolio of 309 properties and 6.6 million square feet (plus additional land held for development). That development push is currently underway in six provinces.

“We are not an acquirer of finished product,” said Zakuta. “We are developing, we have a lot of product in the pipeline and new stuff comes onstream on a regular base. We are seeing lots of opportunities today, lots of redevelopment opportunities today that we didn’t see a year ago.”

“It is a good place to be for a lot of reasons,” he added. “I’m sure you realize that the enclosed mall business is tough these days . . . very, very difficult. So we don’t have a lot of exposure to that fashion-style tenant that is hurting.”

Plaza also doesn’t have much exposure to Target Corp., which announced last week it was making a quick retreat from Canada after piling up losses over two years north of the border. Plaza hosts one Target store in Moncton, but doesn’t expect it will have an opportunity to repurpose the location. “We probably won’t get a crack at it because they will end up selling the lease to someone else.”

A different sort of REIT

Plaza touts itself as being different from most REITs and a year after its listing on the TSX main exchange, it shows no sign it is feeling any need to conform to the herd. “We finance differently from our peers, we have no short-term debt other than the stuff under development,” said Zakuta.

“We have done a lot of 50- and 25-year mortgage terms, which is unusual in the REIT universe. We’re also a REIT where insiders own a significant stake in the business. So the guys that are running it operate as entrepreneurs/owners.” (Insider ownership is about 23 per cent).