The Cadillac Fairview Corporation Limited used the unveiling of the expansion of Toronto’s Sherway Gardens shopping centre to launch a new brand identity and strategy on Tuesday. 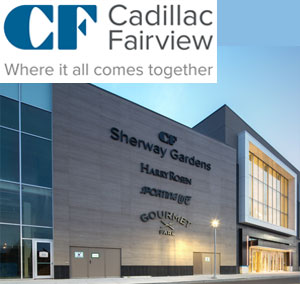 “We want to distinguish our shopping centres but still leverage the heritage of our properties and the equity that has existed in the names of our properties for, in some cases, decades,” said Cadillac Fairview senior vice-president of marketing Jason Anderson.

Cadillac Fairview operates seven of the top 10 performing malls in Canada and the name of each of its shopping centres will now be preceded by the letters “CF” in an effort to establish a more direct connection with shoppers.

“I don’t think it matters to a consumer what company owns a mall,” said Anderson.

Cadillac Fairview has also introduced a more modern and legible corporate logo that incorporates the tagline “Where it all comes together.” The brand identity is being rolled out across the company’s 20 Canadian shopping centres. Its office properties will also adopt the new logo while retaining their existing names.

Cadillac Fairview is emphasizing the focus it’s putting on attracting top retail brands from around the world along with offering better dining experiences in attractive and modern facilities.

The company is also updating its digital strategies and employing “community specialists” across the country whose job is to communicate with consumers in new ways. That in turn has resulted in 40 per cent growth in its social media audience in the last 10 months.

“Our initial focus is around mobile-responsive websites, an app that provides you with the basics but also some great trend information, and engaging through social media,” said Anderson.

“As the future evolves around digital, we’ll think more about what kind of work we can do in the background around data. There’s a tremendous amount of data out there that can help us learn more about our customers and engage with them more effectively and in a more personalized way.”

Cadillac Fairview has more than $2 billion invested in current Canadian shopping centre development, which Anderson said is more than the top four REITs in the United States combined.

Kate Spade New York, Free People, De Beers, Indigo, Eileen Fisher and Samsung will also be opening at the mall. The redevelopment will culminate with Saks Fifth Avenue and Nordstrom set to open in 2016 and 2017.

Vancouver’s CF Pacific Centre is going through $350 million in redevelopment that includes new retailers going into new spaces, including Nordstrom’s opening last week. Nordstrom opened in March and a new dining hall followed in the summer, while Simons will debut next August at Ottawa’s CF Rideau Centre as part of its $350-million redevelopment.

“It really comes down to investment and commitment,” said Anderson.

“This is the next step on a journey. At a time when we’ve been investing significantly in our properties, we feel that now is the time to start to create a bit of a national identifier in our properties and make that promise that we’ll offer a premium experience.”

Cadillac Fairview is wholly owned by the Ontario Teachers’ Pension Plan and has a portfolio valued at more than $28 billion. Along with its affiliates, it owns and manages more than 36 million square feet of leasable space at 66 properties across North America.