Calgary remains one of the nation’s most dynamic real estate markets, as growing global energy requirements generate new jobs, wealth and demand for prime commercial space in the home of the second-largest number of head offices in the country. 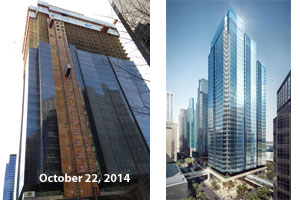 One of the most intriguing new projects is Cadillac Fairview’s Calgary City Centre, which will include a 36-floor office tower and a 40-storey hotel and residential tower along with retail elements, restaurants and more that will take up an entire downtown city block adjacent to Eau Claire Market when PCL completes construction. The class-AA office tower is currently under construction with the second building to follow at a future unspecified date.

The site’s master plan by Calgary-based Zeidler/BKDI Architects  features: a private courtyard drop-off for the hotel and residence and a secondary drop-off for offices; a three-tiered enclosed garden with retail and restaurants; retail outlets offering products and services tailored to tenants, condominium residents and hotel guests along the avenues surrounding the office tower; public art and extensive landscaping; and three connections to the 18-kilometre +15 system that features more than 60 pedestrian skywalks over busy Calgary streets.

The fully accessible office tower’s Canadian limestone-floored lobby will feature 10.2-metre (34-foot) ceilings and glass exterior walls, while its podium will incorporate amenities on the ground and +15 levels that will be served by two escalators. There will be 73,800 square metres (820,000 square feet) of rentable office space on 31 floors featuring continuous floor-to-ceiling glazing wraps to provide both scenic views and incoming natural light.

A destination dispatch elevator system will calculate the most efficient car assignment based on demand for eight low-rise and eight high-rise high-speed elevators. Two dedicated service/freight elevators provide service from the underground parking levels to the upper mechanical penthouse, while three parking elevators will go up to the +15 level.

Calgary City Centre offers the largest parking facility in the core, with five full levels underground housing 632 stalls, 450 of which are reserved for tenants. A tenant-only ramp will speed up entrances and exits, while there will be space for 250 cyclists to lock up their bikes.

The building is designed to achieve LEED-Platinum certification and use 25 to 45 per cent less energy relative to the Model National Energy Code for Buildings (1997). The tower will meet LEED-approved standards for enhanced indoor air quality and a low-maintenance green surface will cover half of the roof areas. Cadillac Fairview promises continuous investment in improving year-to-year environmental performance.

Security is becoming a bigger concern, and the office tower will have: a manned lobby desk with security access control and monitoring; security patrols of common areas; a loading dock staffed with security during business hours and monitored in off hours through closed circuit televisions (CCTV) from the lobby security desk; CCTV and motion sensors in public areas; and employee card readers for areas restricted from the public.

No retailers or restaurants have yet signed on for the project.

“Nothing’s been done, and that’s intentional,” says Walsh. “They want to get the office building leased first.”

The hotel and residence building is part of Phase II and is a work in progress.

No hotel operator has been announced, but the Ontario Teachers’ Pension Plan-owned Cadillac Fairview promises it will be five-star quality and feature a deluxe spa, fine dining, ballroom, conference facilities and a bar/lounge.