Calgary condo selling out with no show suite

Anthem Properties Group Ltd. sold 252 condominiums at its new Parkside project as of Saturday, which Altus Group claims is the most units sold during a grand opening period in Calgary since the 2008 recession. 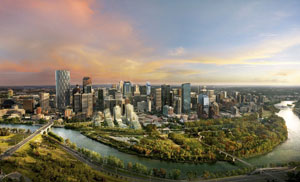 “With 1,800 people registered for a chance to buy one of 288 available condos, people lined up before doors opened on Thursday,” said Anthem sales and marketing vice-president Greg Zayadi. “We built on the success of Waterfront’s first two phases. Even without a show suite, people bought condos based on location, floor plans and price points.”

Parkside will be directly adjacent to Sien Lok Park and encompass four buildings of 17, nine, nine and six storeys as part of Anthem’s 10-building Waterfront development in Eau Claire along the Bow River. Prices range from $289,900 to $2.3 million for units that begin at just over 500 square feet and go up to almost 1,400 square feet. Units will also come with parking spaces and storage lockers. Construction will begin next spring, with completion expected in the spring or summer of 2018.

Anthem purchased the land just east of the Eau Claire Market in 2004 and started construction on Waterfront in 2007. The first two buildings were 22 and 24 storeys, respectively, and included 450 condo units.

Completion date expected to be April

The Outlook phase of 175 units in two buildings of 16 and four storeys is expected to be completed in April.

Waterfront’s final phase is expected to launch next year. It will be located on the north side of the site at the entrance to Prince’s Island Park and be comprised of nine- and four-storey buildings with another 77 units. A coffee shop and liquor store have opened on the site and a Brazilian steakhouse is under construction.

The entire Waterfront development is expected to be finished in 2018 and encompass more than 1,000 units.

Independent market analysts at Altus Group say there are approximately 6,200 condo units in pre-construction or construction phases in downtown Calgary and the adjacent Beltline district.

“Currently most units are sold before completion, as Calgarians — young and old — look to urbanize their lifestyles,” said Matthew Boukall, director of residential advisory services for Altus Group. “Unlike prior to the recession, in today’s market we are seeing much more sustained success, as we saw this weekend with Waterfront.”

Illustrating just how hot the market is, Fortress Real Developments senior vice-president of research and analytics Ben Myers wrote in an RENX column earlier this month that nearly 2,500 condo apartment units have been completed in the Calgary Census Metropolitan Area this year and only two remained unsold at the end of September.

With Statistics Canada reporting that 77 people move to Calgary daily, it’s projected the downtown population will grow from 35,000 to 75,000 by 2035. The boom is spurring a new downtown economy, with four million square feet of office space under construction and new stores, services and entertainment options opening to accommodate the influx of new residents and workers.

“Skyline will be completely transformed”

“The downtown condo market is a segment of housing that never existed before in Calgary,” said Zayadi. “The city’s skyline will be completely transformed in the coming years. We look forward to releasing more condos early next year.”

Vancouver-based Anthem is a 175-person real estate investment, development and management company founded more than 20 years ago. It has since invested in, developed or managed more than 210 projects in Western Canada worth approximately $2.5 billion.

Its portfolio is comprised of more than 3.5 million square feet of commercial space, 40 acres of urban and suburban land held for future development, and approximately 3,500 condo units either in the design and development stage or under construction.

Anthem purchased Alberta-based development company United Communities for $200 million in February. United was a strategic fit for Anthem, as it added expertise in buying and entitling land, subdividing it, putting in roads and sewers, and selling the land to homebuilders.

It also gave the company a stake in about 2,000 acres of land owned by various joint venture partners and a small homebuilding division in Sacramento, Calif.