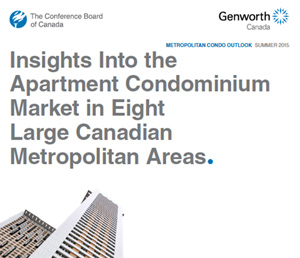 “Single-family homes are unaffordable in some markets, which is pushing people into the multi-family dwelling market, and many cities and provinces have residential intensification mandates so they’re encouraging people to build higher density units.”

“The market has been hammered by falling oil prices and we’re forecasting sales to act accordingly on existing and new units,” said Wiebe. “We’ve already seen inventories of new units that are held by builders rise.”

The median existing condo price may have already bottomed out and future gains will be modest.

“We’re forecasting the median condo apartment price to ease this year but stabilize in 2016, assuming that oil prices don’t fall further and there’s a bit of a recovery,” said Wiebe.

“Edmonton has reacted somewhat less to the oil price decline than Calgary, partly because it’s shielded by provincial government employment,” said Wiebe. “Starts have picked up so far this year because a lot of plans were made before oil prices fell.”

Rising inventories and slowing absorption will bring starts back down in 2016.

“On the resale side, we’re forecasting a pretty big pullback in sales after two years of pretty good growth,” said Wiebe. “We’re not forecasting the median condo apartment price to fall, but it’s only going to grow by less than two per cent this year and it’s going to be flat next year.”

Vancouver’s condo market is strengthening along with its overall housing market. Existing unit sales are rising strongly along with prices.

“Condo prices aren’t going to rise anywhere like single detached prices are,” said Wiebe. “Last year they rose by about three per cent and this year we’re forecasting just under two per cent.”

Demand for new condos is brisk, and builder inventories hit a post-recession low over the winter, so starts will rise modestly.

“Starts fell last year and the year before, and we’re forecasting not a lot of change this year, maybe a couple of hundred units compared to what we saw last year, but certainly not anywhere near the peak levels that we saw back in the 1990s,” said Wiebe.

The prevalence and influence of foreign purchasers remains hotly debated along with responsive regulatory action, and Wiebe calls them a wild card when it comes to forecasting the Vancouver market.

“It is subject to the vagaries of foreign demand, and that makes it risky, but I wouldn’t call it a bubble. Vancouver is experiencing population and employment growth, so there are real things pushing the market forward. There’s certainly offshore demand, but it’s not the whole story.”

Low mortgage interest rates and improving employment are bolstering a turnaround in Victoria’s housing demand. Sales of existing condos and absorptions of newly completed units are both firm. Accordingly, Victoria’s median condo price growth will be the fastest among the report’s eight cities in 2015 and starts will jump.

“Victoria’s prices are pretty high, which has limited its attraction to retirees in recent years,” said Wiebe, noting the city has the highest proportion of people over 55 (at close to 35 per cent) among the cities in the report. It has also registered the slowest annual growth rate (at 2.8 per cent) for that age group over the past 10 years.