Five office buildings with about a million square feet of unleased space will become part of downtown Calgary’s skyline by the end of 2018, adding to a glut that doesn’t bode well for landlords in a depressed market dominated by energy companies. 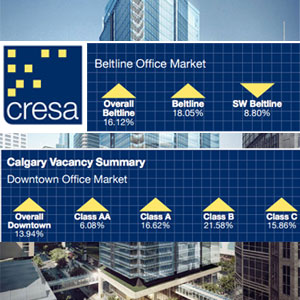 “These leases were signed with relatively long-term, aggressive growth plans and, with what’s happening now, the growth isn’t materializing and in a lot of cases that growth is reverting and there’s contraction,” said Cresa Calgary principal Adam Hayes, who authored a report about the city’s downtown and Beltline office markets in the third quarter of 2015.

“How much of the space that they’ve drawn down in these buildings is actually going to be occupied and how much additional supply may spin out in the sublease market once they get their final head counts together for their respective occupancy dates?”

Cadillac Fairview’s 820,000-square-foot Calgary City Centre is just being delivered and Hayes said it’s 87 per cent leased after Progress Energy made a major commitment a year ago.

The five buildings still to hit the downtown market over the next three years have approximately three million square feet of office space, with about two-thirds already accounted for.

Brookfield Office Properties’ Brookfield Place Calgary – East has 1.4 million square feet and is 71 per cent leased. It should be completed in 2018 and its anchor tenant is Cenovus Energy.

Oxford Properties’ Eau Claire Tower has 615,000 square feet and is 80 per cent leased. It should be completed in late 2016 and its anchor tenants are MEG Energy, Long Run Exploration and Peyto Exploration & Development Corp.

Manulife Real Estate’s 707 Fifth Street has 564,000 square feet and is 58 per cent leased. It should be completed in 2017 and its anchor tenant is Brion Energy.

TELUS, Westbank Corp. and Allied Properties REIT’s TELUS Sky building has 430,000 square feet and is 36 per cent leased. It should be completed in 2017 and its anchor tenant is TELUS, the only non-energy company among the major tenants committed to the new buildings.

LPI Corp.’s Bow Professional Centre has 60,000 square feet and, according to the Cresa report, none of it is leased. It should be completed in 2017.

Calgary is headed toward its third straight year of negative absorption, and this year will be the worst of all. Year-to-date absorption is negative 1,558,516 square feet, compared to a 15-year average of positive 600,000 square feet.

“Activity remains scarce and is isolated to companies with upcoming lease expiries or those choosing an opportunistic approach to their real estate strategy,” said Hayes.

“Taking everything into account, it doesn’t come as a surprise that average net rental rates in the sublease market have fallen over 50 per cent in the last year. Landlords with significant head lease vacancy are starting to compete with the sublease market and, although their rental rates are higher, they are offering very aggressive economic incentives in the form of landlord’s work, cash allowances and free rent.”

Vacancy projections were similar five years ago after the global financial crisis, but Hayes said infrastructure and oil sands companies stepped in quickly to fill the space. The possibility of a prolonged period of high vacancies is now much greater because this economic downturn is more energy-centric and it’s unclear where the demand to fill empty space will come from.

Buildings in the Beltline district have always traded at a discount to their downtown neighbours and, while the area’s vacancy rate is at 16.12 per cent, it hasn’t increased as dramatically because of less available sublease space and not as much exposure to the energy sector in the tenant mix.

“We’re seeing an environment that we haven’t seen in Calgary in a very long time where, in a lot of circumstances, it’s cheaper to be downtown than it is to be in the Beltline if you’re looking at the sublease market in particular,” said Hayes.

The major new office project in the Beltine is Centron Real Estate Development and Construction’s Place 10 – East, scheduled for a 2017 completion. The 14-storey building has 316,500 square feet of space, none of which is leased according to the report.

“I would be surprised if we see any new developments kicked off over the next 12 to 18 months just because no developers are going to go on spec given the risk that’s associated with that choice today,” said Hayes. “Very few tenants are going to choose to take on a new development because they can find better economics elsewhere.”