Calgary office leasing market could be in for rough year 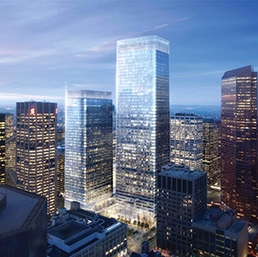 In 2013, 396 transactions of $1 million-plus were completed in the Greater Calgary Area, resulting in $3.2 billion worth of investment activity. That represented the fifth-best year on record despite a 33 per cent decrease in annual investment.

The Calgary office and retail markets softened in 2013 while both the industrial sector and land markets grew.  The office market recorded seven transactions, down from 14, and retail recorded one transaction compared to seven the year before.

This is not Cowtown entering into a bust cycle after a boom, however. It is a reflection of the overall Canadian market, according to Greg Kwong, regional managing director for CBRE in Alberta.

“It’s not just a dip in Calgary, it’s a dip in overall investment activity in Canada,” Kwong said in an interview. “That’s a function of Bay Street, where a lot of the REITS and public institutions couldn’t raise money to buy real estate.”

Kwong does foresee the potential for a weak Calgary’s downtown office leasing market in 2014.

“The oil and gas firms are having a difficult time raising money to go drill wells and do their exploration up in Fort McMurray. But even with that, our vacancy rate is about nine per cent,” Kwong said. “It’s generally a pretty stable market.”

Any new buildings opening within the next year are all but occupied, according to Kwong.  The new Calgary buildings, expected to come on stream by 2018, could readily be filled by a business seeking 100,000 to 800,000 sq. ft.  A single tenant “could fill up a building with one signature” said Kwong, reflecting the optimism pervading the Calgary real estate market.

Kwong said that Calgary differs from cities like Edmonton, Halifax or Montreal where average-sized tenants are looking for 50,000 to 100,000 sq. ft and where one million sq. ft. could take years to lease.

“Calgary, it could take months because of the cyclical nature of the oil patch,” Kwong said. “One day the president of a major oil company could say we’re OK with 100,000 square feet and then a month later find out he’s been acquired or acquired somebody else and they need 300,000 square feet, which doesn’t happen that often in other markets.”

Encana recently put two downtown smaller office properties up for sale, indicating they are not core to the company’s business. The Calgary Herald reported that the 18,000-square-foot Le Rocc Building and the 19,000-sq.-ft. CUPS Building  are available for purchase. Encana owns the latter jointly with Cenovus.  In close proximity to The Bow and in prime downtown locations there is speculation that they may be future office tower locations.

Each of the last three years has been marked by record growth in the Calgary industrial markets and the sales volumes and capital flows have increased for four consecutive years.

“Calgary has the unique title of having the best infrastructure for distribution companies,” Kwong said.

The city is a strong north-south connector for goods from the United States to the Yukon, and east-west, for shipping inventory through from Chicago to the Pacific coast.

Distribution companies shipping product for firms like Walmart form the backbone of the industry. E-commerce isn’t a big player as of yet, but Sears Canada recently signed a deal for a 250,000-sq.-ft. e-commerce warehouse.

The other consistent, year-over-year performer has been the industrial, commercial and investment (ICI) market, according to RealNet, which reported the market has registered growth in sales volumes and transactions over the last three years.