Office vacancy rates rose throughout Calgary in the second quarter, aided by an increase in sublease space due to layoffs, according to reports from Barclay Street Real Estate for the city’s downtown, Beltline and suburban office markets. 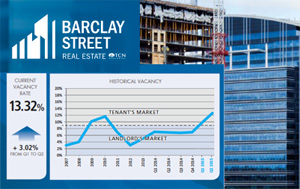 “The reality is that contraction is happening amongst many oil and gas companies as they continue to weather the low oil price storm,” said Barclay Street research analyst Christopher Rundle.

“Those companies that were not lucky enough to have lease expiries for this time period may have offered sublease space to the market. But with such a small amount of market activity occurring, many sub-landlords are motivated to alleviate their existing lease commitments by offering extremely competitive rates. This is an interesting time where it is very possible that, on some deals, rental rates could actually be lower than the operating costs.”

Prospective tenants are showing a preference for waiting until the last possible moment before committing to a new lease, according to Barclay’s downtown office report. Where in the past a prospective tenant may have started the leasing process a year in advance of a lease expiry, the current environment has shortened the deal process and tenants are now initiating the leasing process two to three months from expiry.

The downtown office vacancy rate was 13.32 per cent, up from 10.3 per cent in the first quarter, returning 1.21 million square feet to the market. There were vacancy increases in class-AA, class-A, class-B and class-C properties. Forty-five per cent of the overall number of opportunities available measured less than 6,000 square feet, and 44 per cent of the empty space was available through sublease.

Office vacancies increased by 1.59 per cent to 15.15 per cent quarter over quarter, representing negative absorption of 118,525 square feet, in the Beltline. Spaces under 6,000 square feet rose to 66 per cent of what was available, up from 58 per cent in the final quarter of last year. Sublease options ranged from 935 square feet in Barclay Square to 78,316 square feet in Citadel West.

There’s 1.17 million square feet of new development under construction in the suburbs, making it the most active market, and Meredith Block and Quarry Crossing are scheduled for fixtures as early as this fall. Those two projects combined will add 330,000 square feet to suburban inventory.

“The days of projects being built on spec are behind us for now, so it remains that several projects are waiting on commitment from a tenant before development is started,” said Rundle.

“We know of two suburban projects that were underway but have been capped at the parkade level while now waiting for a tenant. Many large block space offerings currently exist from very motivated landlords and sub-landlords, so there will need to be a significant increase in market activity before proposed projects are resumed.”

Rundle believes that, if existing conditions remain constant, a further two per cent increase in vacancies in all three markets is very possible over the second half of the year.

“Calgary is of course heavily weighted in oil and gas, so, if an economic environment of persistent low-priced oil continues, then vacancy will of course be affected throughout the city. I would expect downtown to be affected most significantly due to the concentration of oil and gas head offices.”